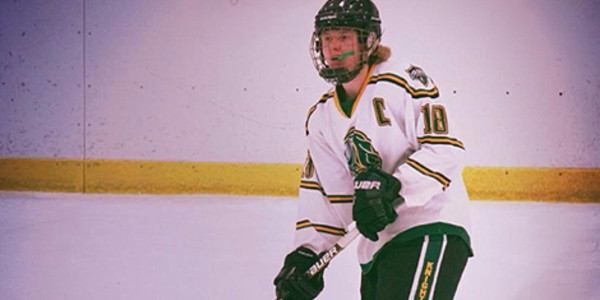 Eugene, OR. -The Eugene Generals have officially tendered defenseman Logan Sanders, the third player to tender with the team this offseason.

From Wasilla, Alaska, Sanders attended Colony High School, where he was named captain as a junior and senior for aColony Knights hockey team who had great success this past season. In twenty-six games last year, the eighteen year-old accumulated twenty-two points (seven goals and fifteen assists) as a veteran who helped guide his team to new heights.

For the first time since 2002, the Colony Knights won the North Star Conference Championship, breaking what Sanders called “a high school hockey curse” for the program. Led by veteran defenseman Sanders, the Knights were then able to advance in the 4A Hockey State Championship by defeating Dimond High School, an accomplished program who has won seven 4A state titles in its history, most recently as 2013.

In addition to playing for Colony High School, Sanders also recently played for the U-18 Alaska Jr Avalanche. Despite not getting the desired results during the team’s regular season, the Avalanche did have success in the Thanksgiving Shootout in Arizona. Playing against teams from the Northwest and even Canadian clubs from Calgary and Winnipeg, the Junior Avalanche were able to defeat the Idaho Falls Eagles to win the Thanksgiving Shootout, one of Sanders’ favorite moments this past season.

Aside from his leadership on the ice, Sanders also believes his vision and awareness will help out the Generals this season. “I’d say I have good vision on the ice," articulated Sanders. "I try to move the puck well and look for the open guy to move up the ice for a good scoring opportunity.”

Along with possessing good vision, Sanders also described himself as being skilled on offense as a defenseman. “All of my coaches have described me as an offensive defenseman," Sanders said. "I use my hands to make rushes once in a while if I see an open lane.”

Sanders also talked about his relationship with Generals Forward Buddy Dale, whom he grew up with and attended Wasilla High School. Having played with and against each other in hockey and baseball throughout the years, the two have remained close family friends, and even squared off against one another in baseball last night (Colony defeated rival Wasilla 10-2).

With this forthcoming year being his first in junior hockey, Sanders talked about what he hopes to accomplish this season and beyond. “I want to improve as a player and help out the team as much as possible,” he explained. “A few years from now, I hope to wind up playing college hockey and stay on the ice as long as I can.”

Generals Head Coach Justin Kern, also originally from Alaska, expressed how Sanders can step up and fill the voids from veteran defensemen who recently moved on.

“He’s a very strong defenseman who will help reinforce our defensive corps next season,” stated Kern. “He’s also been a leader for most of his teams growing up and I’m looking for him to bring that leadership to the team right away. Growing up playing hockey in Alaska, he has a very competitive drive and I hope he comes here ready to make an impact right away.”

Sanders will be in Eugene this August for the Generals Main Camp, where the team’s 2015-16 roster will be determined.

For more information:Ryan ColbyDirector of CommunicationsEugene GeneralsThis email address is being protected from spambots. You need JavaScript enabled to view it.541-359-4154 (office)425-233-0890 (cell)