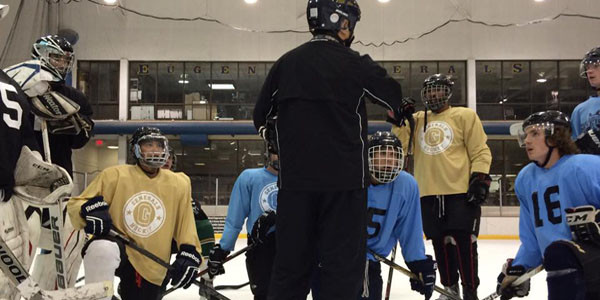 The Eugene Generals’ Main Camp is well underway, with players and goalies taking the ice in hopes of earning a spot on the 2015-16 roster.

Players from all over the country, including Alaska and New York, have come to Eugene for the Generals’ annual Main Camp held at the Rink Exchange. These players are trying out for the Generals as they enter their eleventh season in the Northern Pacific Hockey League (NPHL).

After goalies had a separate session Friday night, it was the skaters’ turn to hit the ice and make a good first impression with an on-ice practice Saturday morning. Once the first practice concluded, the players participated in a stretching and yoga session, led by Generals Strength and Conditioning Coach Catrina Reed. 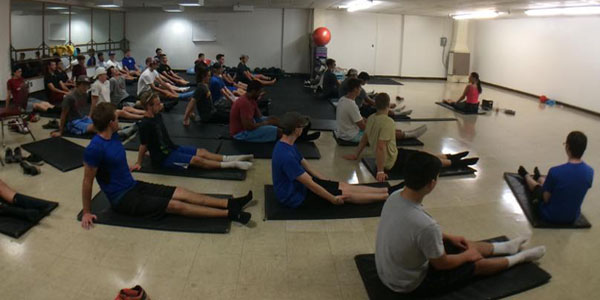 After a short break, the players were divided into two teams—blue and gold—for a game of three, 26-minute periods with a running clock. Team Gold, led by Head Coach Justin Kern, defeated Team Blue by a score of 5-2.

This morning, the players had yet another scrimmage beginning at 9, with the blue and gold teams ultimately tying at four apiece. The team then held an hour-long workout session outside on a beautiful day, led by Reed and Assistant Coach Daniel Gomez

Coach Kern expressed his satisfaction with how the long-awaited Main Camp has gone over the last few days. “We’ve had a great turnout so far. The players are working hard, everyone wants to be here, and they are happy to be part of the process. It should translate to a successful season for us”

Entering his first camp as part of the coaching staff, Coach Gomez shared similar sentiments of how well the weekend has gone thus far, particularly in the off-ice workouts and on-ice scrimmages.

“There are a lot of hard workers here. I’m really happy the workouts have gone well, something Catrina and I have been focusing on. The games have been high intensity with lots of physicality. Camp is going as well as we thought it would, if not better.”

The Generals have one more on-ice practice today, which is currently going on until 3:30. Tomorrow, the players will skate once more at 10:30 in the morning until noon. Shortly after, the coaching staff will make the tough decisions on who will join the Generals for their eleventh season. Visit the Generals’ website for the remaining 2015 camp schedule.

All practices are open to the public free of charge. Fans and media are more than welcome to come out and catch a glimpse of the Generals’ Main Camp.

Once the 2015-16 roster is determined, players may choose to go home before reporting back to Eugene on August 29th. Practices will begin that following Monday on August 31st.