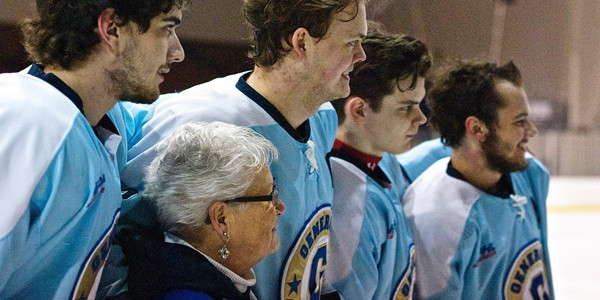 The Eugene Generals are looking for host families who are willing to house Generals players this upcoming 2015-16 season.

Each season, families in the Eugene and Springfield community volunteer to open their homes to Generals players. With players coming to Eugene from different parts of the country—even the world—host families are extremely vital to the longevity and success of the team.

Once the 2015-16 roster is determined after the Generals’ Main Camp in August, the chosen players will be assigned to a host family from the beginning of September until the season ends around March.

Responsibilities for a host family include providing sufficient housing, emphasizing education and study habits, and maintaining a safe environment for players.

Housing a Generals player is a very rewarding experience for both the family and player. The bond between billets and players is everlasting and something that can only be described through experience, as Leilani Towner, who joined the Generals as a billet just last year, emphasizes.

“I can think of no better way to provide a role model for a youth hockey player, support a local junior hockey team, and help a young man in this exciting time of his life than to be a host family. The rewards are limitless.”

The benefits and rewards of housing players is embodied through Jayne Detering, the Generals’ Director of Player Housing. Detering is one of the few members of the Generals organization who has been with the team all ten years, and has housed players every year, including four this season (pictured above). She was also named NPHL Volunteer of the Year for her efforts in coordinating and assigning homes for players, while also finding families in the community who are willing to open up their homes.

In addition, host families also receive complimentary season tickets for the entire household, as well as free tickets to the Generals’ Annual Christmas Party and End of the Year Awards Banquet.

If you are interested in potentially hosting a Generals player or have further questions, please contact the Generals front office at 541-359-4154 or This email address is being protected from spambots. You need JavaScript enabled to view it. for more information.