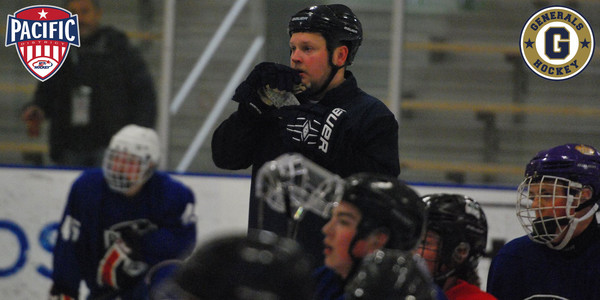 In what is quickly becoming a yearly tradition, members of the Eugene Generals staff journeyed to Sharks Ice in San Jose, California this spring to volunteer at the 2016 USA Hockey Pacific District Youth Player Development Camp.

Over the course of the four-day event (May 5-8), over 200 of the best hockey players from all across the Pacific District - Alaska, California, Hawaii, Nevada, Oregon, and Washington - were invited to San Jose to work with top end coaches while competing against one another in hopes of an inviation to USA Hockey's Youth National Select Camp in Buffalo, New York later this summer.

Attending this year's PDC on behalf of the Generals was Head Coach Justin Kern, General Manager Flint Doungchak, and Associate GM Alex Stimson. Kern and Doungchak both served as talent evaluators while Stimson led one of the twelve teams of players that were assembled for the camp. In addition to his duties as an evaluator, Doungchak, who was recently sworn in as the Pacific District's Coach-In-Chief, also helped support the camp in a managerial capacity by helping coordinate the weekend's schedule, format and events.

"Beginning to end, it is such a rewarding experience," says Doungchak proudly. "Hockey has been so good to all of us, and frankly, I never thought in a million years that I'd be in the position I am in. Therefore, we all feel that it is our duty to volunteer and do whatever we can to help grow the game, particularly in Oregon and on the West Coast." 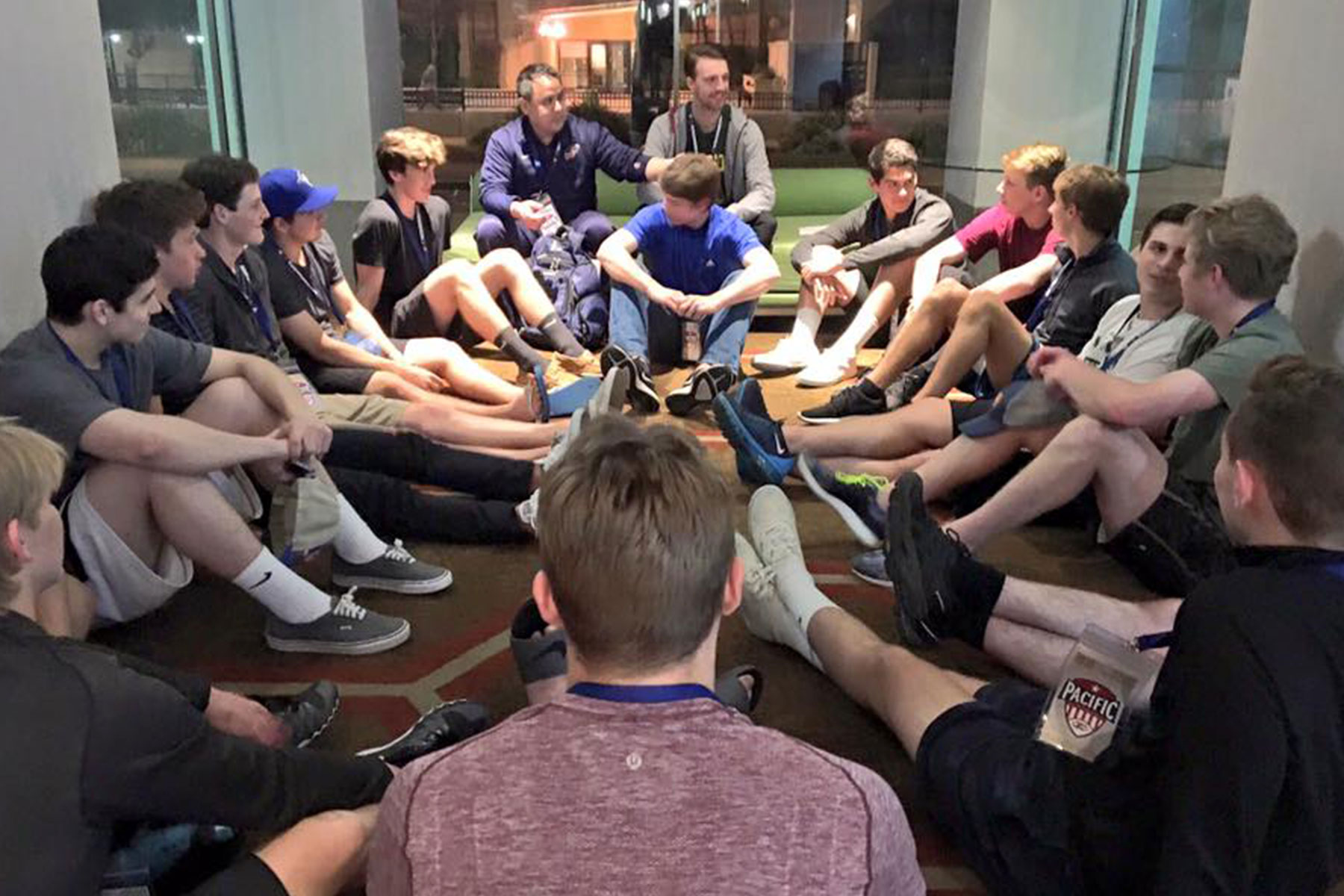 After players arrived and were assigned to their teams, the power-packed weekend of hockey kicked off at Sharks Ice (practice facility of the NHL's San Jose Sharks) where players enjoyed an intense, ADM-inspired practice with an array of NCAA DI and USA Hockey coaches. Staff members in attendance included Denver's David Carle, Brown's Mike Levine, Alaska-Anchorage's Matt Thomas, Alaska-Fairbanks' Corbin Schmidt, and Kevin Reiter of USA Hockey's National Team Development Program (NTDP), among others. Afterwards, players quickly transitioned into "game mode" as each team competed in a total of three games throughout the weekend, showcasing their skill to USA Hockey evaluators as well as countless college and junior hockey scouts. 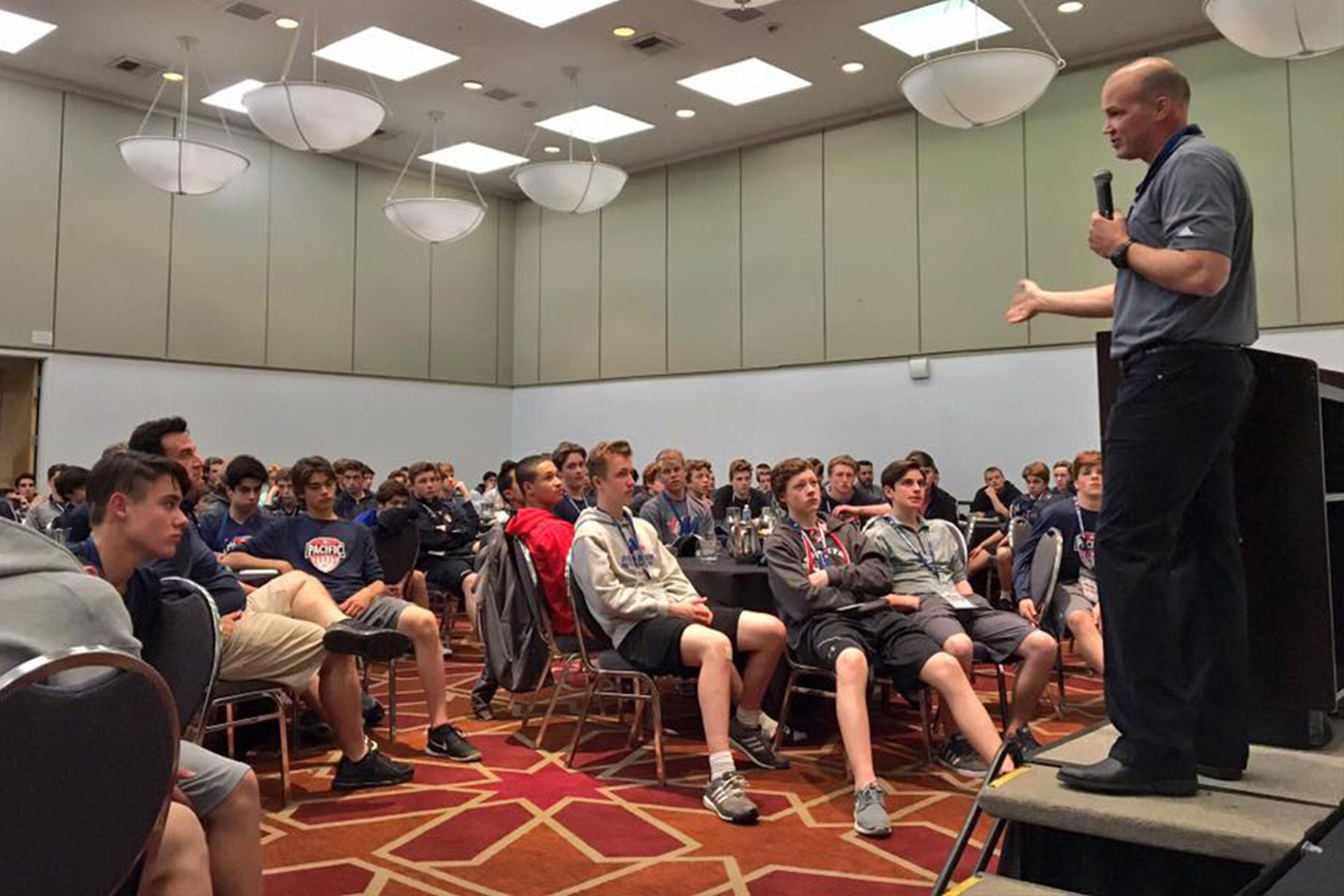 Off of the ice, players were treated to a number of informative talks that included the LA Kings' Davis Payne (above), USA Hockey's Ken Martel and Kevin McLaughlin, and a round-table Q&A with nearly a dozen NCAA DI coaches and staff.

"Working at the PDC is always a fantastic time," says Generals Head Coach Justin Kern. "Being a team leader last year was an absolute blast, particularly getting to know the players on a more personal level while also helping them prepare for games. This year, however, I was asked to take another step up to be an evaluator, and that proved to be an amazing experience as I was able to watch these kids battle it out trying to earn a spot at National Camp. Being a member of the group that makes those selections was a tremendous honor, but also a tremendous responsibility, and I thoroughly enjoyed the process of being able to work with some of the Pacific District's most prominent and well-respected coaches to ensure that we are sending the right players to Buffalo. I owe the Pacific District a huge 'thank you' for affording me the opportunity to participate in this process."

"I couldn't agree more with 'the Kernel' and his wise words," says Associate GM Alex Stimson. "Like Flint also mentioned before, I too never thought that I'd find myself in a position like this - helping and influencing the development of so many players. More than anything else, when I look back the Pacific District's PDC, the one word that continues to come to mind is 'rewarding'. It truly is such a thoroughly rewarding weekend full of so many dedicated coaches and staff members that work behind the scenes to keep growing our sport."

The 2016 Pacific District Youth Player Development Camp is only the first of multiple times this summer that USA Hockey will be calling on the Generals staff for support. Up next: the 2016 Western Regional High Performance Camp at the end of June, a week-long camp in Colorado Springs, Colorado that is co-directed by Doungchak while Stimson will serve as a team leader and the camp's official media correspondent. Afterwards, the two will return back to Eugene for a brief period of rest before flying across the country to Buffalo, New York to serve as team leaders at this year's USA Hockey Youth National Camp.

You can keep track of the Generals staff at this summer's USA Hockey events by following Doungchak, Kern and Stimson on Twitter, as well as the Western Regional High Performance Camp and USA Hockey's Player Development Camps. In addition, remember to follow the Pacific District on Facebook and Twitter for news and behind-the-scenes content from all across the district.