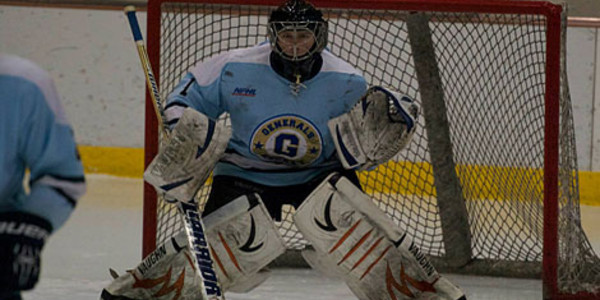 This weekend’s games, both starting at 7:35 on Friday and Saturday, will conclude the regular season home schedule for the Generals. After this weekend, the Generals will play their last five games all on the road.

Because of the last home regular season games, the Generals will be having their annual Fan Appreciation Night this Saturday night at the Rink Exchange. There will be numerous prizes and giveaways throughout the night, including a team poster for the first few hundred fans. Fans also have the opportunity to get their posters and other Generals merchandise signed by the team after Saturday’s game.

With seven games left in the regular season, the Generals are still alive in the hunt for the NPHL Playoffs. They are currently eight points behind the Cheney Icehawks, who are in fourth place and will play host to the Generals in two weeks.

The Generals were unable to accumulate any points last weekend when they hosted the Bellingham Blazers. The Blazers, who are trying to catch the first-place West Sound Warriors in the standings, took both games in Eugene, winning 8-1 and 16-2.

The last meeting between the Generals and Outlaws took place on January 10 in Kennewick, Washington. Despite the Outlaws scoring first, the Generals stormed back when they scored four unanswered to win 4-1. The rookies for the Generals played a large role in the win as Jack Geisler, Nash Berkowitz, and Cody Sizemore all scored goals. Sizemore’s goal was his first in a Generals’ uniform, and he also added an assist.

Overall, the Generals and Outlaws have only squared off against each other five times this season. The Generals have won four of those five, with the lone loss coming back on November 20 on the Outlaws’ home ice.

Since the aforementioned win against Tri-Cities a few weeks ago, the Generals have not scored much in the previous four games. In those four games, two each versus West Sound and Bellingham, the Generals have only lit the lamp four times. The Generals will look to get more shot opportunities against a Tri-Cities team who has surrendered the most goals in the league.

In addition to the offense, the Generals will look to diminish the number of shots against. Of all the six teams in the NPHL, the Generals have allowed the highest number of shots on goal with a whopping 1,588 against. Goalie Daniel Spencer has faced 958 shots from opponents this season, over 200 more than any other goalie in the league.

Tickets for both games are available online at eugenegenerals.com or the team’s ticket office located at the Rink Exchange. Tickets are $10 for adults, and $6 for both students and seniors; children under the age of five are free.

For those who cannot make it to either game on Friday or Saturday, EGHN will broadcast both contests live on the team’s website for free. Coverage for both games begins at 7:20, fifteen minutes before the puck drops. Alex Stimson will serve as host and play-by-play commentator.