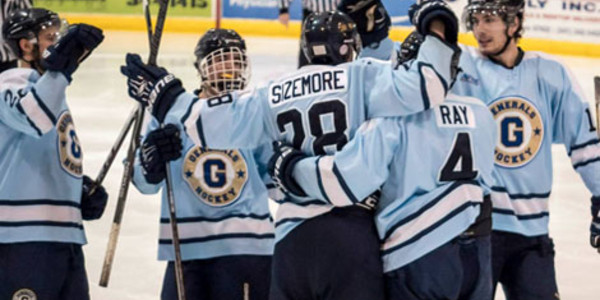 It was an exciting night at the Rink Exchange as the Generals doubled the Outlaws in shots on goal in front of a raucous crowd. The Generals outshot Tri-Cities in each period, and outnumbered them by a count of 58 to 29.

Buddy Dale provided the fireworks as he recorded his first career hat trick. His first of three goals was also the first one of the game as he lit the lamp just twelve seconds into the second period.

After Tyler Thorn tied the game at one for Tri-Cities, the Generals scored two more times in the second period to increase their lead to 3-1. Jared McDaniel connected at 16:05 when Baxter Cox and Dustin Gomez set him up for the score. Two minutes later at 18:28, Addison Wells scored on the power play on an assist from Dale.

The Outlaws would not go quietly into the night as they trimmed their deficit to one at 8:04 of the third period. Jason Hambleton tallied his first goal of the night with Adam Shimamoto providing the assist.

Dale scored his second goal of the night when he lit the lamp at 13:39. Daniel Gomez and Sheldon O’Neill each had assists on the play for their first points of the night.

Daniel Gomez then scored a goal of his own when he connected on the power play at 17:16. Captain Kyle Ruchas and Dale recorded assists on the successful power play.

With a little over a minute left in the game, Dale completed the hat trick when he scored unassisted in front of the net. In total, the second-year player from Alaska recorded five points, setting a career-high.

It was also a special night for the twenty-year olds who played in their last regular season home game with the Generals. Daniel Gomez, Kyle Ruchas, Addison Wells, and Jared McDaniel all recorded at least one point in the win. Also, Daniel Spencer played spectacularly in goal as he stopped 27 of 29 shot attempts.

The Generals are off next week but play on the road in two weeks. They have important road tests with two games in Cheney and one in Tri-Cities, all of which will have playoff implications for the Generals.