Weekend Preview: Generals Close Out Season on the Road 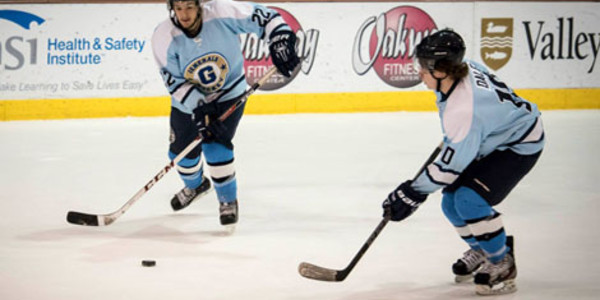 Eugene, OR. -The Eugene Generals (13-26-1) will conclude their tenth season this weekend when they travel to play the West Sound Warriors (35-3-3) and Wenatchee Wolves (26-13-1) on Friday and Saturday.

This weekend’s games will be the last two games for the Generals this season. Last weekend, the Generals were officially eliminated from playoff contention when they lost two games to the Cheney Icehawks in Eastern Washington.

The two games played between the Generals and Icehawks were closely contested for most of, if not the entire, game. On Friday, the Generals were within two goals in the third period before the Icehawks pulled away late for a 6-2 win. The next night, both teams went back and forth in a seesaw battle with numerous lead changes. Ultimately, it would be the Icehawks who came out on top with a late third period goal to win 5-4 and end the playoff hopes for the Generals.

Despite being eliminated from playoff contention, the Generals responded nicely on Sunday, exploding for nine goals in a 9-5 victory over the Tri-Cities Outlaws. Multiple players had contributions in the win, including Buddy Dale who posted a career-high in points with seven (one goal and six assists). Marks Mezsargs and Jacob Ray each recorded a hat trick, the first of their respective careers; Ray’s three goals were also his first in a Generals’ uniform.

In terms of playoff implications, both games this weekend will have none as the first round matchups are set in stone. West Sound has already clinched the regular season league title and will have home-ice advantage throughout the playoffs; they will face Cheney in the first round. Wenatchee, meanwhile, will try to continue their successful season as a third seed when they face the two-time reigning champion Bellingham Blazers.

This weekend will also mark the last time the twenty-year olds will be playing for the Generals. Defensemen Kyle Ruchas and Addison Wells, Forwards Daniel Gomez and Jared McDaniel, and Goalie Daniel Spencer will suit up for the last time and play their last games in junior hockey.

Both games can be seen on Fast Hockey. Friday night’s game in West Sound starts at 7:35, and Saturday’s game in Wenatchee has an early start time of 2:35.