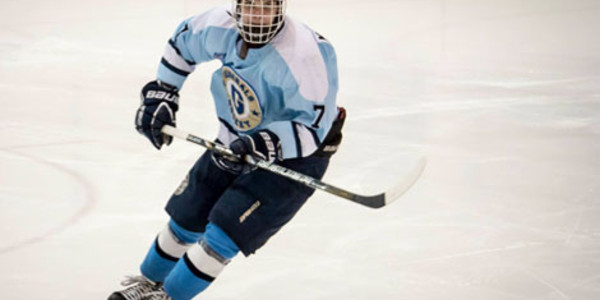 Wenatchee, WA. -The Eugene Generals (13-28-1) concluded their tenth season with a 4-2 defeat by the Wenatchee Wolves.

Playing a matinee 2:35 game, the Generals were competitive with the Wolves throughout the contest. However, Wenatchee was able to double the Generals in shots on goal 40-17, propelling them to a 4-2 win.

Hayden Givens of Wenatchee gave his team the lead early with a power play goal just 5:26 into the game. Conor McNamara assisted on the goal.

In his last game playing for the Generals, Addison Wells tied the game at one less than a minute later. His goal was assisted by Jared McDaniel, who was also playing in his final junior hockey game.

Joshua Chamberlain lit the lamp later in the period at 16:28 to help Wenatchee regain the lead. Andrew Lee and Connor Dunn each had assists on the go-ahead score.

The Generals trimmed their deficit to two with under four minutes left in the game. Dustin Gomez tallied his second goal of the season at the 16:37 mark of the final period. The Generals could not score again, thus ending the game—and their season—with a loss.

Saturday’s game marked the final time the twenty-year olds—Wells, McDaniel, Kyle Ruchas, and Daniel Spencer—played in a Generals’ uniform. Daniel Gomez, another twenty-year old, did not make the road trip due to Marine Corps obligations.

With the twenty-year olds moving on, the Generals will try to fill the holes from their departures. During the impending offseason, the team will reevaluate their roster and scout new players for the future in hopes of reaching the playoffs once again.

The Generals’ landmark tenth season of hockey would not be possible without the support of players, fans, host families, sponsors, volunteers, and coaches. On behalf of the entire organizations, the Generals would like to thank everyone for supporting the best hockey in the Willamette Valley and Eugene, Oregon.