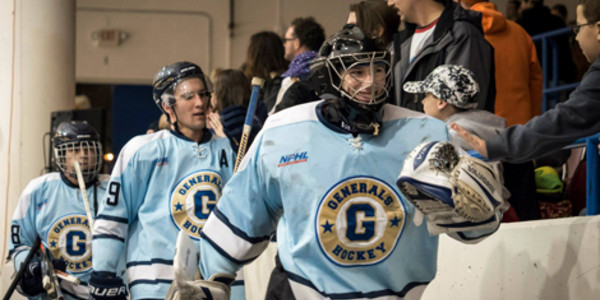 EUGENE, Ore. - The Eugene Generals have announced the individual team awards for the 2014-15 regular season.

A yearly tradition for the team throughout their time in Eugene, Generals players, coaches, staff, host families, and fans gathered together to wrap up the season for the annual awards banquet held at The Rink Exchange.

As always, a number of awards were up for grabs this season, including Team MVP, Offensive/Defensive MVP, Rookie of the Year, Most Improved Player, Player's Choice Award, the Bobby Freeland "Golden Hart Hat" Award, Host Family of the Year, Volunteer of the Year, and the first ever "Golden Ladle Award." Here's how the awards shook out:

Defensive Player(s) of the Year: Kyle Ruchas and Addison Wells

Rookie of the Year: Marks Mezsargs

*An award given for the very first (and likey, the very last) time in honor of the player who is always "stirring the pot"

Head Coach Justin Kern, a former Generals player himself, couldn't help but smile as he handed out each award. However, a few awards in particular stood out to him. "It was great to see Marks Mezsargs sweep Offensive Player of the Year and Rookie of the Year, and having both Addison [Wells] and [Kyle] Ruchas win Co-Defensive Players of the Year was an awesome moment, they were the backbone of our blue line all season long. Speaking of backbones, Ruchas and Wells may have been the backbone of our blue line, but Daniel Spencer was the backbone of our entire team. It was great to see him win Player's Choice Award, he was so crucial to us throughout the entire season."

Daniel Gomez, who recently accepted a position with the Generals as an Assistant Coach for the 2015-16 season, was clearly honored to be awarded the Bobby Freeland Golden Hard Hat Award in his final season of playing junior hockey. "That's the kind of award I wanted to win when I got [to Eugene]," said Gomez. "I think it's something that everyone should strive for. Of course, everyone should try to score as many goals as they can, but I think the Hard Hat Award is about more than that; it's about character rather than just talent, and how you show that character out on the ice."

All in all, it was another fun and successful banquet for the Generals as the players and organization celebrated another season of junior hockey in Eugene. "It was a fun night overall," said Head Coach Justin Kern, "and it was great to give some special recognition to a group of guys that worked incredibly hard and fought through a lot."