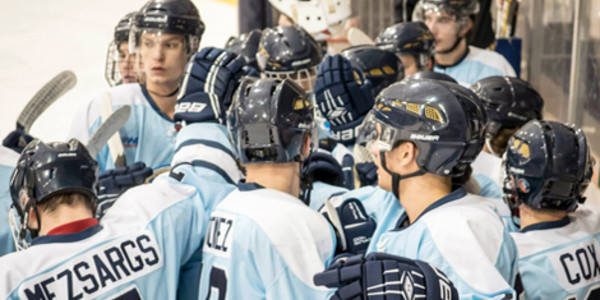 Eugene, OR. -Preparations for the Eugene Generals’ eleventh year of hockey have already begun with the team already recruiting players the 2015-16 season.

With the team’s season ending over a month ago, Generals Head Coach Justin Kern is determined to fill a roster of players who will ultimately be trying out during the Generals Main Camp in Eugene on August 15. Kern is entering his third season on the coaching staff, his first full season as the head coach.

“I think there are a lot of good players at the places we are heading to,” Kern expressed. “I want to let these players know what it means to play for the Eugene Generals and instill some of our values on them before they come to Main Camp.”

Entering his first season on the coaching staff, Assistant Coach Daniel Gomez looks forward to the challenge of recruiting players for the season. “It’s a lot of hard work but it’s cool to recruit players from teams I’ve played against before,” Gomez mentioned. “Hopefully we can get these players to come to Eugene so we can put together a great team this season.”

On April 9, the Generals will embark on their first scouting trip when they visit Pittsburgh for the 2015 America’s Showcase. Played at Robert Morris University Island Sports Center, America’s Showcase is an event where the nation’s top high school players have the chance to be scouted by other hockey teams all over the country. Over a five-day span, over fifty hockey games will be played to give coaches and scouts plenty of insight on how certain players may or may not fit a team’s roster.

The month of May will be particularly busy for the Generals as they begin a span of three consecutive weeks of travel, starting with the USA Hockey Pacific District Player Development Camp. Running from May 7-10 in San Jose, the camp provides youth players from the twelve USA Hockey districts the opportunity to showcase their hockey skills to respective coaches and scouts.

On May 15 and May 22, the Generals will then make two separate trips to Colorado for the JPS and CCM Showcases in Arvada and Denver, respectively. The JPS Showcase running from May 15-17 will provide the opportunity for young players to not only be scouted by Tier III Junior Hockey teams, but also colleges in Division I and Division III as well. Similarly, the CCM Showcase on Memorial Day weekend will also provide players a chance to get recruited by the Generals and other teams in the country.

The last official scouting trip for the Generals will be in Las Vegas on June 22-25 for the Global Vegas Hockey Camp and Clinic. Global Vegas is one of three camps for the Global Hockey Camps and Clinics, with the other two being in Vancouver and Chicago. The Generals have attended the Las Vegas camp in the past, most recently last year, and are optimistic to find players who will mesh well with the team.

After Global Vegas, the Generals will still be active in recruiting throughout the month of July leading up to the Main Camp running from August 15-17. Coach Kern is adamant on recruiting players who possess not just a variety of skills, but quality of character as well.