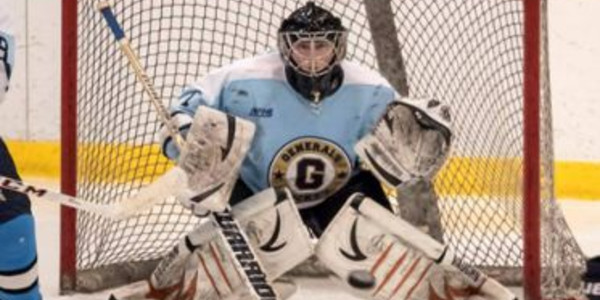 Spending the last two years with the Generals, Spencer, a twenty-year old, leaves Eugene as one of the most-accomplished goaltenders in the team’s ten-year history. Having spent a majority of his first season as the backup, Spencer emerged in this past year as the team’s primary starting goalie.

During the 2014-15 season, Spencer faced more shots—1,233—in a season than any other goalie in Generals history. In addition, his 1,076 saves marks only the second time a Generals goalie has eclipsed the thousand-save mark during a season. Only Dylan Woodring had more saves in a season than Spencer when he recorded 33 more during the 2009-10 season.

Originally from Gloucester, New Jersey, Spencer will travel to the Upper Peninsula of Michigan and don the blue and white for the Finlandia Lions this upcoming year. Finlandia University is a member of the Northern Collegiate Hockey Association in the Midwest, which operates in NCAA Division III. The NCHA has ten teams overall, playing in Michigan, Minnesota, Wisconsin, and Illinois.

Majoring in Sports Management, Spencer talked about what ultimately led to his attending school all the way in Michigan. “I did my research after talking with the Assistant Coach [Matt Marchel],” Spencer explained. “Finlandia looked like a great place for me because it had my major and I could also continue my hockey career.”

Spencer also elaborated on what he wants to be doing after he graduates from Finlandia, whether it is on or off the ice. “I’d like to continue playing hockey after school,” Spencer hopes. “If not, I would like to use my degree and hopefully work for an NHL team one day.”

Generals Head Coach Justin Kern raved about Spencer’s hard work and performance on the ice, all leading to his commitment to an NCAA Division III university. “Daniel was a complete player here in Eugene,” Kern asserted. “He was the backbone of our team on the ice, making over a thousand saves this season. He gave everything he had in every game.”

Aside from his ability as a goaltender, Coach Kern was even more exuberant about Spencer’s character and the kind of person he is. “Most importantly, Spencer exemplified what the Generals are all about,” beamed Kern. “He is a complete person on and off the ice. He would give the shirt off his back if you were ever in need. Daniel Spencer is exactly what it means to be a General.”

The Eugene Generals wish nothing but the best for Daniel Spencer as he pursues his hockey career as well as his degree in Sports Management.