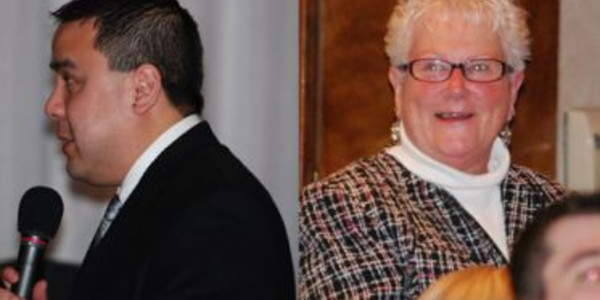 Eugene, OR. - The Northern Pacific Hockey League Awards were announced Monday, with two members of the Generals receiving honors:

Both Detering and Doungchak have been vital for the success of hockey in Eugene. The two have been a part of the Generals organization since the team’s inception back in 2005.

Over the last ten years, Detering has volunteered as the Director of Player Housing. In her position, she coordinates and assigns homes to players on the team. Detering also tries to find families in the community who are willing to open up their homes to incoming Generals players.

In addition to arranging host families for players, Detering also hosts players herself. Throughout her ten years as a host family (also referred to as a billet), she has housed over thirty players at her home in Harrisburg, Oregon, including four players this past season. To this day, Detering keeps in touch with most of the players she has hosted over the past decade.

Having been the General Manager for the Generals since day one, Doungchak is not just involved with front office operations for the team. He is also an integral part of NPHL operations, currently serving as the league’s Vice President, a position he has held for over three years. Doungchak previously served as Deputy Commissioner prior to being named Vice President.

NPHL Commissioner Garry Swain, who is just finishing his first year in that role, expressed his gratitude for everything Doungchak has done for the league. “Flint has been a great teammate to work with,” commented Swain. “He’s been instrumental in creating the league schedule and is also very astute around USA Hockey.”

The Trailblazer Award is presented as a lifelong recognition for someone who has been continuously dedicated to the success of the NPHL. Being involved with the NPHL throughout the past decade, Doungchak has, according to Swain, “been a great person to bounce ideas off of to help the league moving forward.”

The Eugene Generals would like to congratulate Jayne Detering and Flint Doungchak on receiving the prestigious NPHL honors.