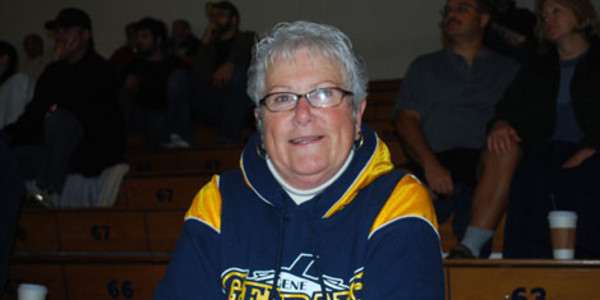 With the Eugene Generals about to begin their historic tenth season, we will take a look back at former players, staff, volunteers, and anyone else who have made hockey in Eugene possible.

As the Eugene Generals enter their tenth season, there are a handful people who have been involved with the team since its inception. Jayne Detering is one of them.

Currently the Director of Player Housing for the Generals, Detering has been with the team since their very first year in 2005. Throughout the past decade, she has hosted over thirty players and still keeps in touch with many of them to this day.

Going back in time almost nine years ago, Detering did not hear about the possibility of hosting players until her grandson approached her one summer day. As she recalls, he came up to her and talked about a new team starting in Eugene and how the players will need places to stay.

When asked about what ultimately made her decide to become a host mom (also referred to as a billet), Detering recalls, “They needed billets at the time. I just thought, ‘what’s the worst that could happen, I might as well take a chance.’ Needless to say, here I am today ten years later.”

One of Detering’s favorite things about the Generals is the camaraderie amongst the players. She remembers one of her favorite memories, involving former player Johnathon Isbell.

Isbell, a former Generals player who Detering hosted, was no longer on the team but wanted to surprise the players around Christmas time. As she recounts, “when he opened the door, every kid at the house picked him up and twirled him around.” Isbell then went to the Generals’ practice later that day to surprise the rest of the team, much to the delight of the players. To this day, Detering reminisces about how this was one of her favorite memories of the past decade as it totally exemplifies the bond that exists between the players.

With everything that has happened in the past decade with the Generals, it begs the question of how long Detering will continue doing this. She does, however, talk about possibilities if there are enough host families for the players.

“I think I’ll continue as long as I’m needed,” commented Detering. “Ideally, it would be great if we had enough billets that the kids would not have to drive thirty minutes each way. If we have enough houses, my house could be used for when a family goes on vacation and the players need a place to stay for a few days, or as a temporary home when players are added during the season.”

Detering also looks forward to the tenth anniversary celebration in December. Not only will she see former players she once housed, but Detering might be hosting those same players again who have asked to stay at her Harrisburg home.

The Generals’ 10th Anniversary Celebration will be December 19th at the Sweetwater Restaurant at Valley River Inn.

Detering looks forward to hosting new Generals players this upcoming 2014-15 season. She will find out which players she will be hosting shortly after the team’s Main Camp on August 15-18 at the Rink Exchange.