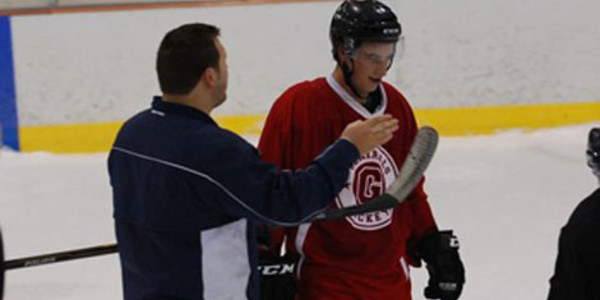 Eugene, OR -Eugene's only elite level hockey team started practice today for its historic 10th season. "When we started the team, a 10th season seemed like a lofty goal, today it's a reality," smiled Generals owner Ken Evans. As the longest standing hockey franchise in the history of Eugene, the Generals have accomplished what so many have failed to do prior - bring hockey to the masses in Eugene.

"Hockey has grown in every aspect in Eugene. We have more fans. There are more kids than ever playing in town. More adults play hockey today than any other period. Eugene has grown into a hockey community," said Flint Doungchak, General Manager and an original member of that 2005 season. "I'm so proud of the many people that have helped create a tradition of hockey in Eugene."

One of those people is Veneta native Connor Hoernlein, who started as a youth player, then became stick boy for the team and eventually joined the Junior team three years ago. "It was always a dream to play for them," said Hoernlein, "Until the Generals came along, local talent didn't really have something to reach for, and now I'm a part of a great tradition of hockey here that has evolved over the past 9 years." He steps into this season, his fourth, as one of leaders of the teams and one of the league's most prolific players.

"He's really grown to become quite the hockey player and we expect big things from him this season," said Justin Kern, Assistant Coach and a member of that inaugural 2005 Generals team. Kern played for the Generals for two seasons between 2005-2007 and then went on to Concordia University in Wisconsin, a Division III NCAA school, where he also earned a degree in Business Administration. He returned to the Generals, along with his fiancé Samantha, two years ago. "I remember the hockey, but what I remember the most is the sense of family, the people, and experience."

Kern references not only the players, coaches and fans, but also the families that the players live with during their stay with the Generals. One of those people is Jayne Detering, from Harrisburg, who is also celebrating a tenth anniversary of a different kind. She will be hosting players in her home for a tenth straight year. "The time goes by so fast, but it has been such an enriching and fulfilling experience. My boys have grown up to become such wonderful men and I love the time I've spent with them."

The Generals play in the NPHL (Northern Pacific Hockey League) along with the Bellingham Blazers (Bellingham, Was.), Cheney Ice Hawks (Cheney, Was.), Fort Vancouver Vipers (Vancouver, Was.), Tacoma Knights (Tacoma, Was.), Tri-Cities Outlaws (Kennewick, Was.), Wenatchee Wolves (Wenatchee, Was.) and the West Sound Warriors (Bremerton, Was.) The NPHL is a sanctioned USA Hockey Tier 3 Junior Hockey League operating in the Pacific Northwest. The League is celebrating its 15th Season.

The Generals returned to practice today and have their first exhibition game in two weeks when they travel to Bellingham to play the Blazers in two quick games on Friday and Saturday night. The Generals then travel to Tacoma, Was. a week later to start the regular season where they will play the Knights on Friday and Saturday, September 19th and 20th.

The Season 10 Home Opener will take place here in Eugene, on Friday, September 26th when the Generals take on the Wenatchee Wolves. Tickets are on sale now at EugeneGenerals.com. Game time is at 7:35 PM.

Please call to schedule interview or to film footage.