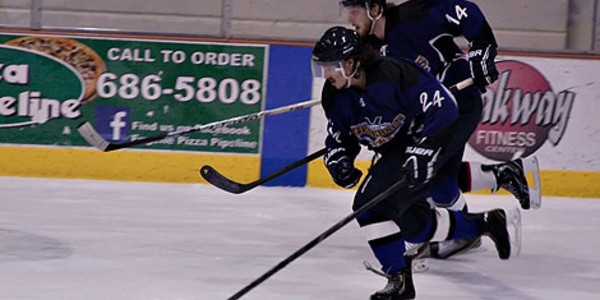 EUGENE, Ore. - Eight former Generals from last season’s roster have moved on to playing collegiate hockey all around the country.

Among the eight Generals’ players leaving, four started the season in Eugene while the other four were acquired before the trade deadline in February.

Former Captain Cody Andersen, who suffered a devastating season-ending injury midway through last season, will take his leadership skills to the Dakota College at Bottineau in North Dakota. He will be suiting up for the Lumberjacks, a team that has won five National Junior College Athletic Association (NJCAA) championships, including a span of winning four consecutive seasons from 2006 to 2010. The Lumberjacks have had notable alumni such as Anaheim Ducks Forward Dustin Penner, who has won two Stanley Cups in his NHL career

Last season’s leading goal-scorer Zak Johnson will be playing for the Raiders at the Milwaukee School of Engineering. He plans on majoring in Business Management and focusing on Engineering Studies while playing for a team who has won 3 Harris Cup Championships in the Midwest Collegiate Hockey Association. Johnson’s leadership in two seasons with the Generals should provide a significant boon for his new head coach, Mark Ostapina.

Forward Christian Merritt, who rejoined the Generals before the trade deadline, made a huge impact with his timely scoring and ability to come through in the clutch. He will now be attending the University of New England in Maine and donning blue and white for the Nor’easters. With the impact Merritt had with the Generals, it is almost certain that he will improve a team who went 6-17-2 in the ECAC East Conference last season.

Kyle McKibbin and Matt Hopersberger will be joining forces and playing on the same team once again. The two will be playing for the Warriors at Wayne State University in Detroit. This marks the second time the pair will be playing for a team located in the Detroit area; before joining the Generals in the seven-player deal in February, McKibbin and Hopersberger played for the Tennyson Chevrolet in the Midwest Junior Hockey League.

Jon Hultgren will also be playing for the Warriors, but at Waldorf College in Iowa instead. He will be suiting up for a Warriors’ team who lost in the semifinals of the Western Collegiate Club Hockey Association Tournament. Hultgren joined the Generals in February and played in the final six regular season games.

Kenneth Grabeldinger will be lacing up his skates for the SUNY (State University of New York) Canton Kangaroos in Canton, New York. He joins a SUNY Canton team who has won 15 NJCAA championships, with 12 of those coming within a 20-year span from 1973-1992.

Michael Alforque is also moving on from the Generals. He will be going from Eugene to Ogden, Utah and play for the Weber State Wildcats. He hopes to help a team that is on the rise after going to Nationals for the first time in five years last season.

After watching these former Generals' players in Eugene, it will be very exciting to see how each of them grows and develops at the next level.