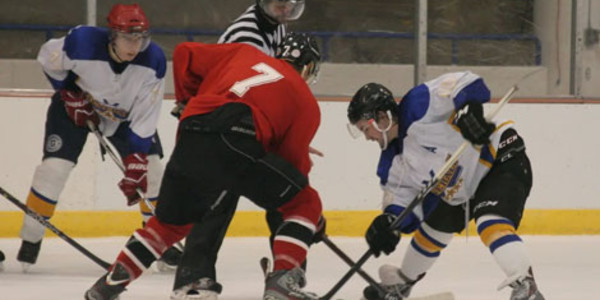 EUGENE, Ore. - The Eugene Generals and the Bellingham Blazers squared off this weekend in a pair of exhibition games in Eugene.

The Generals lost a hard fought battle on Saturday 5-4 and went back and forth in a seesaw battle on Sunday that resulted in a 5-5 tie.

In the first game, the Blazers struck first with a goal from Bailey Shover, but Hunter Hartman responded quickly to tie the game for the Generals. Shover scored his second goal of the game with 1:26 left in the first period to give Bellingham a 2-1 lead going into the first intermission.

The Generals scored three unanswered goals in the second period before the Blazers added one to cut the Generals’ lead to 4-3 going into the second intermission. Kyle Ruchas tied the game with a strike less than three minutes into the period before Matt Walton took the lead with a goal, from Dans Berzanskis for his second assist, at 10:56. Connor Hoernlein added to the lead with a goal at 4:52 on Jared McDaniel’s second assist of the game, but Kevin Duncan of Bellingham trimmed the deficit with 2:51 left in the period.

Bellingham came out firing in the third period to tie the game at 4 with just 35 seconds into the period on Shover’s third goal. Cody Rich took the lead for Bellingham with 5:26 left to make the score 5-4. With the goalie pulled in the waning moments of the game, Walton took one last shot for the Generals that went just wide of the net.

The second game started without a goal until Gerin Wohl scored on a power play with 5:37 left in the first period. The Generals tied the game at 1 with 2:02 left as Sam Orth scored on an assist from Walton.

The second period was high-scoring with five total goals. Mason Wade scored just nine seconds into the period before Connor Hoernlein and Justin Stoner each scored in a twenty-five second span to give the Generals a 3-2 advantage. Bellingham closed out the second period with two goals from Shover and Kristjan Toivola at 12:46 and 7:35, respectively, to take a 4-3 lead.

Dans Berzanskis scored first in the third period at 10:14 to tie the game at 4 and Walton gave the Generals the lead with 6:42 left on an assist from Hartman. Bellingham scored the last goal on a power play at 4:29 from Rich for a final of 5-5.

With the exhibition games now over, each team can make necessary adjustments before the season starts. The regular season will start in a few weeks and the schedule will be posted soon.