Evan Carter and his return to Eugene 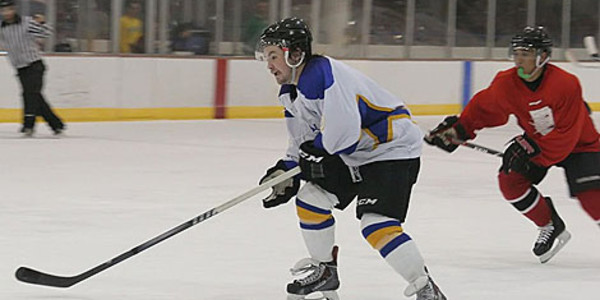 EUGENE, Ore. - When Evan Carter played in his first two games back with the Generals—albeit two exhibitions—he felt right at home playing in Eugene again.

“I loved it. Wearing the blue and yellow again is awesome and I’ve missed it,” commented Carter. “I love the rink, I love the atmosphere of the crowd. It was just an almost impromptu exhibition game and there were still fans here.”

Carter returns to the Generals after spending the 2010-11 season in Eugene. During that time, Carter played in 46 games and accumulated seven points for a Generals’ team that reached the playoffs.

After playing with the Vancouver Vipers last season to be closer to home, Carter is very happy to be playing in another city he loves. “I really like the city of Eugene,” Carter remarked. “The coaching staff and the operations management hold you to a way higher standard than most teams which I think is a very positive thing.”

Over the last two seasons, Carter has stayed in the NORPAC, playing for the Glacier Nationals and Vancouver. Last season, he was chosen as the captain for the Vipers and totaled seventeen points in 30 games.

Playing for a team that finished in last place a year ago, Carter wants and expects the new Generals team to win quite a bit. “I feel like the team itself can produce a lot of points and score a lot of goals. We have a high-powered offense, a good power play, solid goaltending and defensemen so I think we’ll be set.”

In relation to prior teams he has played on, Carter feels this team differs in a few areas. “In the past there were a lot more older guys and veterans,” said the Portland native. “I also feel like depth-wise we have a better core team. The top two lines, the defensemen are really solid and goaltending is definitely spot-on right now.”

After his time with the Generals is over, Carter has an interesting goal set in mind. He wants to try and play pro hockey in England, inspired by his father who is from there. If that does not work out, however, he hopes to play for a college hockey team somewhere.

When talking about his playing style, Carter describes himself as sort of an instigator. “I try to antagonize a lot of people on the ice. People try to say I play like [retired Buffalo Sabres’ player] Rob Ray but personally I try to mimic myself after Brad Marchand [of the Boston Bruins] or [retired player] Sean Avery.”

Carter played in both exhibition games for the Generals against the Bellingham Blazers this past weekend, where the team lost the first game and tied in the second one.