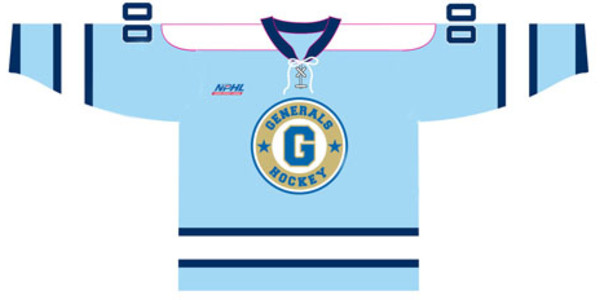 EUGENE, Ore. - The Eugene Generals have announced the unveiling of their new uniforms for this season.

For the home jerseys (above), the team will wear light blue with white and navy blue stripes with the new Generals logo in the center. On each arm, the players’ numbers will appear in navy blue.

As for the away jerseys (below), the Generals will not be wearing white but rather a more cream-color with light blue stripes across. Instead of having the logo, the center of the uniform will say “Eugene.” The away uniform will also have the new Generals logo on both shoulders with the number of each player in navy blue on each arm, like the home jersey.

General Manager Flint Doungchak felt that the timing of the new change in the uniforms was appropriate for the team’s ninth season.

“The Generals have become a tradition of hockey in Eugene and that tradition has had the same colors for the last eight seasons,” he explained. “It’s time to really advance our presence and our brand. We feel that these new modern colors are more appropriate for the team, our fans, and the city of Eugene.”

The Generals will be wearing their new uniforms Opening Night on October 4th when they host the Tri-Cities Outlaws. Tickets are on sale now at eugenegenerals.com.