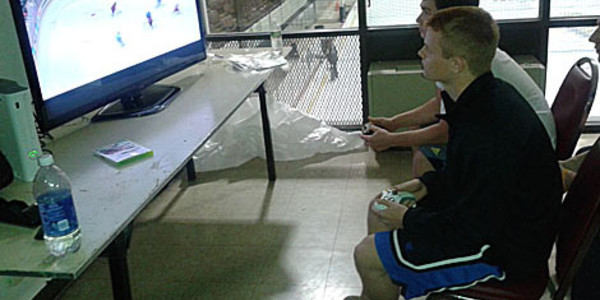 Eugene, OR - The Generals took a break from workouts and practices and participated in an NHL 14 tournament on Friday.

NHL 14 is the popular hockey video game for XBOX 360 and is played by almost every player on the team.

The bracket for the tournament was chosen at random for the twenty-one people who played. Because of the uneven number of participants, some received a bye into the next round while the others had to play in the first round.

Each player had to pick one team to play with throughout the tournament. The selection order to choose teams was randomized as Assistant Coach Justin Kern got the first pick and went with the St. Louis Blues.

The final four participants included all forwards: Dawson Ledgard, Matt Walton, Hunter Hartman, and Erik Rosencrans. Ledgard and Hartman defeated Walton and Rosencrans, respectively, to move on to the finals.

In the finals, Ledgard as the New Jersey Devils and Hartman as the Philadelphia Flyers squared off against one another. In the end, Hartman defeated Ledgard to win the Generals’ NHL 14 tournament and a gift card to Wal-Mart.

The Generals are preparing this week for the home opener on Friday at 7:35 PM against the Tri-Cities Outlaws at the Rink Exchange. Tickets are still available and can be purchased at eugenegenerals.com or by clicking the link below.