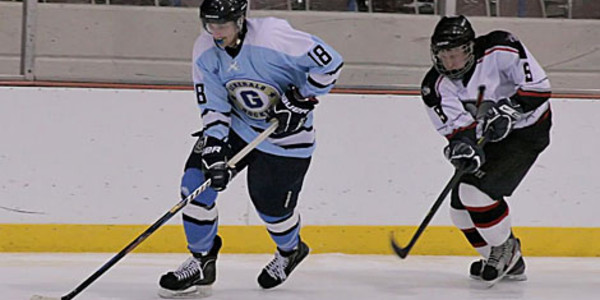 The Outlaws were the first team on the board when they scored at 6:19 when Austin Mayton scored on assists by Alexander Higley and Aaron Questad. Mayton followed up with another goal, this time on a power play, to give the Outlaws a 2-0 at 13:46 in the first period.

With just 40 seconds remaining in the first period, Matt Walton put one past the goalie to put the Generals within a goal before intermission. Connor Hoernlein, playing in his third season with the team, assisted Walton on his goal.

In the second period, Brenden Odell of Tri-Cities scored at 3:33 to give them a 3-1 advantage.

A little under five minutes later, at 8:12, Evan Carter scored in his return back to Eugene with an assist from Ben Sera

With the Generals trying to even the score, Alexander Svoboda responded with a goal of his own to give the Outlaws a two-score advantage at 13:57.

At 15:14, Jared McDaniel and Walton assisted Hunter Hartman for his first goal of the season to put the Generals within striking distance.

The Outlaws scored the first goal of the period again when Questad’s shot reached the back of the net on a power play for a 5-3 lead at 8:03.

Not to be outdone, the Generals answered with yet another goal to make it one-score deficit at 10:48. Erik Rosencrans notched his first goal in a Generals’ uniform while Justin Stoner notched his first assist.

As was the case for most of the night, the Outlaws would not let the Generals even the score as Sheldon O’Neill had an unassisted goal at 14:45 for the final score of the night.

The Generals hit the road next weekend when they travel for a pair of games against the West Sound Warriors next Friday and Saturday. After that, they go north for a Sunday matinee against the Bellingham Blazers.

The next Generals home game is Saturday, October 19 against the Vancouver Vipers. The game will be the 9th Annual Breast Cancer Awareness Night and the team will don their traditional pink jerseys. Tickets are on sale at eugenegenerals.com or by calling 541-359-4154.