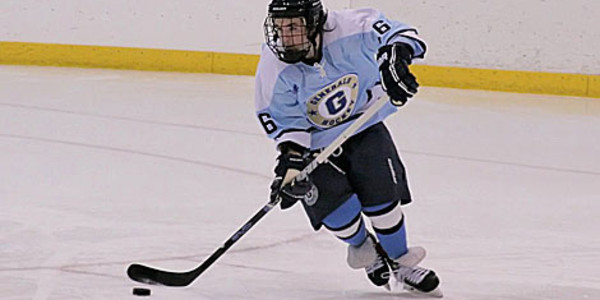 The battle between the two teams was close from the start as neither team would let up. Other than a couple penalties for both the Generals and Warriors, the first period was devoid of any thrills as neither team scored in the frame.

At just 1:26 into the second period, the Warriors struck first as Peter Mingus scored on a goal from Ivan Bondarenko.

Hunter Hartman responded at 4:01 with a goal of his own as the Generals tied the game at one apiece. Dans Berzanskis and Evan Hastings each had their first assists on the season on Hartman’s goal.

At 4:49, just 48 seconds later, Berzanskis put the Generals up by one on the team’s first power play score of the season. Hartman and Buddy Dale assisted on the power play goal.

Midway through the second, Connor Hoernlein added another goal to give the Generals a 3-1 lead before intermission. Ben Sera and Dawson Ledgard each recorded an assist on the team’s third score of the game.

Just ten seconds into the third period, Jimmy Morgan of West Sound scored immediately as he was assisted by Mingus to put the Warriors within a goal.

The Warriors tied the game at three when Morgan recorded his second goal at 16:42, this time assisted by Joe Glithero and Scotty Perkins.

Morgan completed his hat trick and the comeback for West Sound with a power play goal at 17:17 to give his team the 4-3 lead. Mingus recorded his second assist of the game on the final goal.

While the Generals lost a tight one, there were some shining moments for the team. Most notably, Goaltender Daniel Spencer performed spectacularly in his first start for the Generals, recording 47 saves on 51 shots. Also, Berzanskis and Hartman played well, each recording a goal and an assist for the team.

The Generals will have to put this loss behind them immediately as they travel north to play the Bellingham Blazers tomorrow at 3:35.