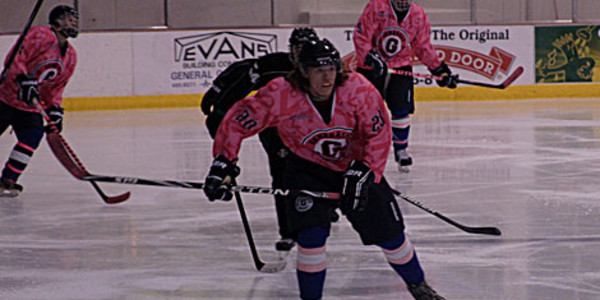 This was a special night for the Generals as the team donned their signature pink jerseys and commemorated the fight against breast cancer with a ceremonial puck drop between the two captains.

The game was scoreless until the 14:12 mark of the first period when Cisco Yslas notched his first goal of the season on an assist from Cody Dettman.

Twenty-two seconds later at 14:34, Hunter Hartman tied the game at one apiece with assists from Matt Walton and Dans Berzanskis.

At 16:16, Vancouver regained the lead when Dettman connected on an unassisted goal to give his team the advantage going into the first intermission.

Late in the second period, the Generals tied the game at two at the 17:38 mark. Connor Bambico, who recently rejoined the team and played in his first game of the season, connected on the tying, power play goal. Walton and Hartman provided the assists on Bambico’s goal.

The Generals took the lead for good at 6:31 in the third period when Kyle Ruchas lit the lamp on an unassisted goal.

Erik Rosencrans provided some insurance for the Generals when he put the team up 4-2 at 10:21. Walton and Bambico were there on the assists.

Hartman recorded his second goal of the game at 13:17 to give the Generals a three-score advantage. Berzanskis and Dawson Ledgard assisted on the play.

Peyton Frederickson of Vancouver trimmed the Generals’ lead when he scored on an unassisted goal at the 13:56 point.

Berzanskis scored the final goal of the night when he connected at 17:34 on a pass from Hartman.

The Generals will be auctioning off the pink jerseys worn tonight by the players. The net proceeds will be donated to support the cause of breast cancer awareness.

The next home game for the Generals will be Friday, October 25th when they host the West Sound Warriors at the Rink Exchange.