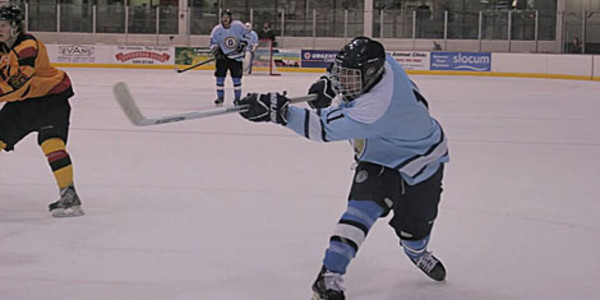 Playing in their third consecutive game in as many days, the Generals travelled from Bellingham to play a day game on the Warriors’ home ice. The Warriors, meanwhile, were playing in their first and only game of the weekend.

The Generals and Warriors were in a tight battle early on with each team exchanging goals. The score was tied at two apiece midway in the second period before West Sound took control and scored six times for their tenth win of the season.

During the first period, the Warriors struck first on a goal from Scotty Perkins at 6:21. Gavin Nickerson and Brantt Heble had assists on the play.

Daniel Gomez continued his torrid play for his new team as lit the lamp at 8:49 on a power play for his third goal in a Generals uniform. Evan Carter recorded the assist on the power play to tie the game at one.

Heble answered at 11:50 on a power play to help the Warriors regain the lead. Peter Mingus and Ivan Bondarenko tallied their first assists of the night on the score.

In the second period, the Generals responded to tie the game at two when Buddy Dale converted the team’s second power play goal of the contest at 1:56. Dans Berzanskis had the assist on the Generals’ last goal of the game.

Nickerson gave the Warriors the lead for good when he connected on a power play at 10:59 on assists from Steven Zavesky and Graham Collins.

With fifty seconds left in the second, Bondarenko scored to hand the Warriors a two-goal cushion going into the final period of action. Joe Glithero and Terrence Cheesboro were there for the assists on the play.

The Warriors controlled the third period, scoring four times all within the first ten minutes. Glithero recorded a power play at 3:56 while Jimmy Morgan scored a shorthanded goal at 9:52 for the team’s final goal. Andy Williams and Henry Huerta had the two other scores of the period, coming at 5:29 and 8:21, respectively.

Next weekend, the Generals will be on the road again as they play two games against the Tri-Cities Outlaws in Kennewick, Washington.

The Generals return home November 15 and 16 to host the Warriors at the Rink Exchange. Tickets are available at eugenegenerals.com or by calling 541-359-4154.