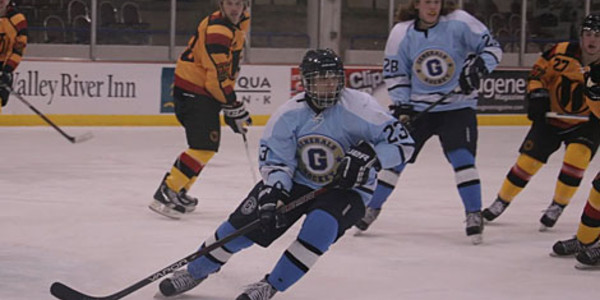 EUGENE, Ore. - The Eugene Generals (4-8-0) will host two games this upcoming weekend against the West Sound Warriors (11-1-1) at the Rink Exchange.

The Generals will play its first home games since October 25th and will look forward to playing on their home ice again. The team spent its five previous games playing on the road, winning two of their five away contests.

After losing its four previous games, the Generals bounced back last weekend in Kennewick, Washington to win two games against the Tri-Cities Outlaws. The wins did not come easy for the Generals as there was some late drama in both games.

In Friday night’s game, the Generals held leads of 3-0 after the second period and 4-1 during the third period before the Outlaws made their comeback. After the Generals scored their fourth goal, Tri-Cities scored the next three to tie the game at four and force overtime. Over a minute into overtime, Connor Hoernlein scored the game-winner and gave the Generals the 5-4 win.

Saturday night provided little scoring but some drama late in the third period. Holding onto a 1-0 lead, the Outlaws had opportunities to force overtime again, but the Generals clinched their 2-0 win with a late empty-netter. Goalie Cody Foster had 35 saves for the Generals in the shutout.

Meanwhile, the Warriors also had a tight, dramatic game Friday night when they hosted the Bellingham Blazers. Down 4-3 late in the third period, Jimmy Morgan tied the game at four with twenty-seven seconds left in regulation to force overtime. With no goals in the five-minute overtime, the game was decided in a shootout where after five rounds, the Blazers scored to hand the Warriors the shootout loss.

The next night was never in doubt for the Warriors as they scored three times in the first period en route to a 7-0 victory. Jimmy Morgan and Ivan Bondarenko each had two goals while Peter Mingus recorded four assists.

In four meetings this year, the Generals are 0-4 against the Warriors with three being played away from Eugene. The last contest between the two teams came November 3rd when they squared off during a Sunday game on the Warriors’ home ice. The game was tied at two apiece midway through the second period before West Sound took off and scored the next six goals for the 8-2 win.

Through the team’s first twelve games of the season, Forwards Hunter Hartman and Dans Berzanskis are tied for the most points with eighteen apiece. Hartman has ten goals and eight assists while Berzanskis has seven goals and eleven assists so far. Berzanskis has recorded a point in four consecutive games and in nine of the past ten as well.