Generals fall to Warriors 4-2 in Eugene 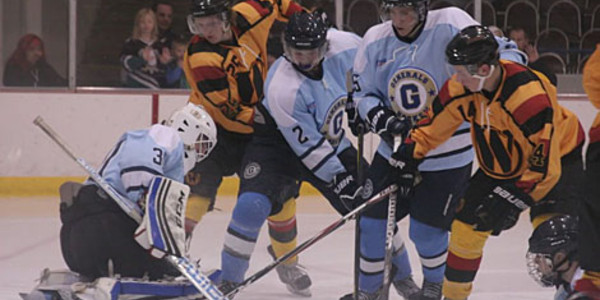 After playing the five previous games on the road, the Generals returned to Eugene for the first time since October 25th. Friday's game was the fourth home game of the season for the Generals.

Neither team could score in the first period as the Generals and Warriors went back and forth in exchanging shots and penalties. The Warriors barely outshot the Generals by a count of 12 to 11.

The second period started out with more scoring as three goals were scored within the first three minutes. Gavin Nickerson scored the first two goals of the game within a thirty-five second span to give the Warriors an early 2-0 lead. Assisted by Ivan Bondarenko, Scotty Perkins, and Andy Williams twice, Nickerson recorded his goals at 1:35 and 2:06. Not to be outdone, Connor Hoernlein put the Generals within a goal at 3:03 when he connected on a pass from Hunter Hartman.

At 15:17, Brantt Heble scored on a power play to give the Warriors a 3-1 lead before the second intermission. Peter Mingus and Joe Glithero were there for the assists.

In the third period, the Warriors got another insurance goal from Bondarenko just twenty-one seconds into the frame. He was assisted by Jimmy Morgan and Mingus on the play.

The Generals would not go out without a fight as they scored at the 11:22 mark to trim the Generals' deficit to two. Hunter Hartman tallied his second power play goal on the season as Dans Berzanskis recorded the assist on the play.

The Generals tried taking advantage of the extra player when they pulled their goalie with a little over a minute left in the game to try and score two more times to force overtime. The Warriors held up on defense to win their second game in a row and end the Generals’ winning streak at two.

Both teams will play each other again tomorrow night at 7:35 at the Rink Exchange. Tickets are on sale at eugenegenerals.com or at the Generals’ ticket office.