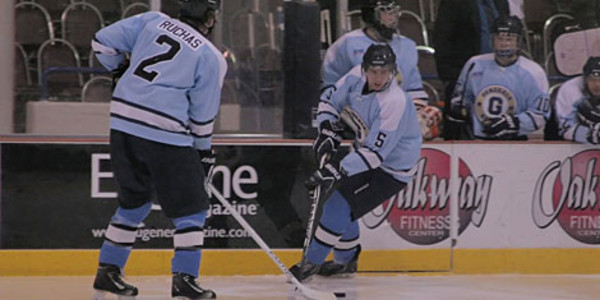 Saturday marked the second time in as many nights the teams played against each other. The Generals played in Vancouver on Friday, winning 6-1 to end their two-game losing streak.

Evan Hastings recorded his first goals in a Generals’ uniform, scoring twice for the first two scores of the game. The goals were scored at 5:12 and 12:33, both coming on assists from Hunter Hartman. Hastings also assisted on the next goal, coming from Connor Hoernlein at 13:52 for a 3-0 advantage going into the first intermission.

Dans Berzanskis kept the scoring going, connecting on a power play strike from Connor Bambico and Hunter Hartman at 2:08 for the fourth goal of the game.

Less than a minute later at 3:04, the Generals took advantage of another power play for the team’s fifth score of the night. Matt Walton scored his first goal since coming back from injury, with assists by Buddy Dale and Evan Carter.

Hartman recorded his first goal of the night at 13:22, scoring on an assist from Hoernlein.

Ten seconds into the third period, the Vipers scored for the first time when they were successful on their power play. Sam Rosenberg connected on an assist from Nathan Decker.

Erik Rosencrans scored at 3:41 against his former team to give the Generals a 7-1 advantage. Berzanskis recorded his second goal of the game a minute later at 4:47 when Hoernlein tallied his second assist.

The final goal came from Erik Hayes on Vancouver at 8:32 on the team’s second power play conversion. Rosenberg and Tim Swanson were there on the assists.

Next weekend, the Generals will travel to Kennewick, Washington to play two games against the Tri-Cities Outlaws.

The Generals return home December 13th and 14th to host the west Sound warriors. The team's Teddy Bear Toss to help children at the Sacred Heart Pediatric Center will be held the 14th at 3:35. Fans receive free admission with a teddy bear or stuffed animal.