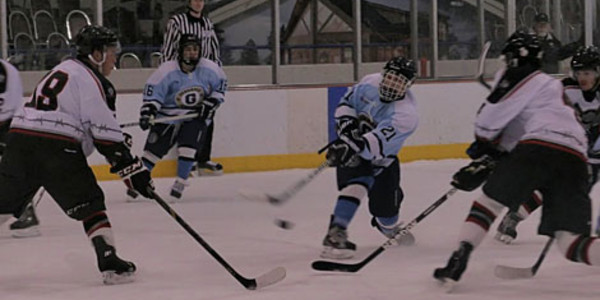 Most of the scoring occurred in the first period as six of the eight combined goals happened in the frame. Cody Anderson of Tri-Cities started the flurry of first period goals when he connected at 4:06 on assists from Austin Mayton and Dalton Brown.

The Generals responded soon after to take a lead on two straight scores. Dans Berzanskis, who recorded a hat trick the night before, tied the game at 5:23 with assists to Erik Rosencrans and Evan Carter. About a minute later at 6:29, Matt Walton scored to give the Generals a 2-1 advantage. Evan Hastings had the assist on the play, his third game in a row with a point.

It was the Outlaws though who would control the rest of the first period, scoring three more times on goals from three different players. Brendan Miller tied the game at two at 13:47 on an assist from Josh Reavy. The other two goals both came on power plays; Anderson tallied his second score of the night with assists to Wyatt Duncan and Chace Epler at 16:36 while Jason Hambelton connected at 18:14 on a pass from Travis Questad.

In the second period, the Outlaws added another score to increase their lead to 5-2 going into the next intermission. Duncan, who was on the Generals last season, scored the team’s third power play of the game at 16:22 with help from Mayton and Sheldon O’Neill.

Trying to come back from a three-goal deficit in the third period, the Generals could only muster one score for a final of 5-3. Walton scored his second goal of the game at the 8:39 mark when he was assisted by Berzanskis.

Power plays had a major role in the outcome of this contest. The Generals could not take advantage of the power play as they did not score on seven tries. Tri-Cities, meanwhile, had great success with the extra man, converting three of six power play opportunities.

The Generals return home next weekend to play a Friday night contest at 7:35 and Saturday matinee at 3:35 against the West Sound Warriors. Both games will be broadcast on EGHN about fifteen minutes prior to game-time.

Friday’s game will be ICHL and Adult Hockey night at the Rink Exchange. Saturday’s 3:35 game will be the Teddy Bear Toss to benefit children at the Sacred Heart Pediatric and Adolescent Unit. Fans receive free admission to the game with a stuffed animal or can purchase one for $10 along with a game ticket. The stuffed animals will be thrown on the ice during the first intermission.