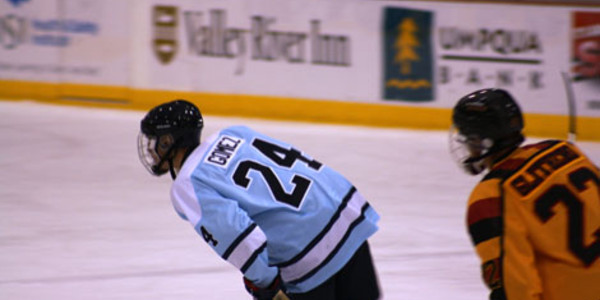 EUGENE, Ore. - The Eugene Generals (6-12-1-0) lost Friday night by a score of 8-2 versus the West Sound Warriors at the Rink Exchange.

Ivan Bondarenko and Peter Mingus played key roles in the win for the Warriors, each recording six points apiece. Bondarenko scored half of the team's goal with a total of four and adding two assists while Mingus has two scores and four assists on the night.

The Generals and Warriors were tight throughout the first period, with only a goal separating the two squads going into intermission. Bondarenko tallied the first of his four scores 7:12 into the frame with assists to Mingus and Jimmy Morgan.

Bondarenko and Mingus scored the next two goals for the Warriors, coming at 2:46 and 6:48 into the second period. Hunter Hartman trimmed the score to 3-1 on a one-timer, set-up by Dans Berzanskis and Matt Walton at 7:48. Morgan connected at 16:16 and Bondarenko completed the hat trick on a penalty shot at 17:41.

Hartman recorded the second of his and the Generals' two goals on the night at 9:04 into the third period. Walton had his second assist while the newest member of the Generals, Quentin Holmes, notched his first point for the team. Hartman's goal came on a power play.

The Warriors had the last three scores of the night, coming on strikes from Mingus, Bondarenko, and Gavin Nickerson. Mingus and Bondarenko each converted on a power play.

Tonight's loss was the third in a row for the Generals. Despite losing by six goals, the Generals still managed to gather 31 shots compared to the Warriors' 43.

Tomorrow's game against the Warriors will start at an early time of 3:35. The Generals will also be having its 2nd Annual Teddy Bear Toss to benefit the children at the Pediatric Unit at the Sacred Heart Medical Center at Riverbend. Fans who bring in a teddy bear or stuffed animal to throw onto the ice will receive free admission to tomorrow's matinee. The tossing of the stuffed animals will happen during the first intermission and everyone thrown onto the ice will be donated to the children at the Sacred Heart Pediatric Unit.