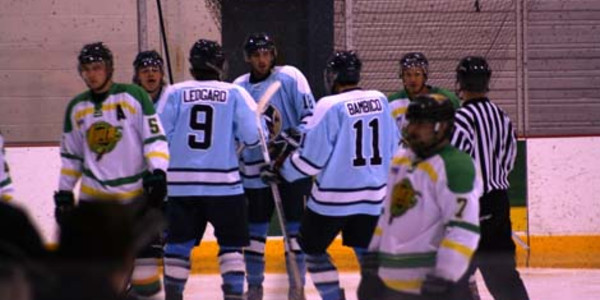 EUGENE, Ore. - In the final game before the Christmas holidays, the Eugene Generals (8-13-1) defeated the Vancouver Vipers (0-23-0) by a score of 5-1 in Vancouver, Washington.

After shutting out the Vipers the night before in Eugene, the Generals almost had another shutout until Vancouver scored late in the third period.

In the second period, the Generals took control of the game with four goals from four different players. The team also outshot the Vipers by a count of 17-7 in the frame.

Evan Hastings scored at 6:07 in the second period on an assist from Matt Ayers, then had an assist on the next Generals’ goal when Hunter Hartman connected at 9:05 to give the team a 3-0 lead.

Twenty-nine seconds later at the 9:34 mark, Walton recorded an unassisted goal for his second point of the night as well as a four-score advantage over the Vipers.

At 16:03, Connor Hoernlein joined in on the scoring by connecting on the team’s first power play goal of the night. Daniel Gomez and Evan Carter each had assists on the successful power play.

In the third period, the Vipers scored their first goal of the game and avoided a shutout at 14:16 with a power play. Peyton Frederickson recorded the power play goal on assists from Sam Rosenberg and Christopher Alberts

Both teams will play their next games after Christmas; the Vipers play next weekend while the Generals play at home New Year’s Eve and New Year’s Day. The Generals host the Outlaws at 4:35 on December 31 and 3:35 on January 1 at the Rink Exchange. Both games will be broadcast on the team’s website on the Eugene Generals Hockey Network (EGHN).