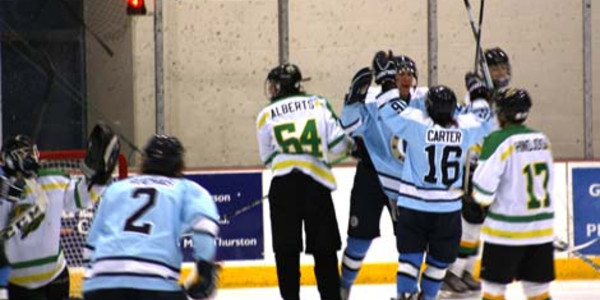 Down 2-0 late into the first period, the Generals were able to take control of the game with a dominant second period, scoring a remarkable ten goals during the frame. The Generals scored ten times on twenty-one shots in the second.

Hunter Hartman had a career-high in points, tallying eight points on four goals and four assists. The Generals captain recorded his fourth goal of the night midway through the second period. With his eight points, Hartman is now second place in franchise history in points during a game; he fell short one point of the franchise record of nine.

Dans Berzanskis also recorded a hat trick for the Generals Tuesday night. Berzanskis scored three times for his second hat trick on the season and even had an assist as well.

The Generals also had some players scoring their first goals in a Generals' uniform. Quentin Holmes scored at the 4:50 mark while Justin Stoner recorded his first at 18:25. Both goals came during the ten-score second period.

During the first period, Caleb Bromely of Vancouver had the first two goals of the game, scoring at 6:45 and 12:51. Scoring at 17:02, Hartman had his first of four scores on the night with an assist to Defenseman Connor Bambico.

The second period is where the Generals took complete control of the game, outscoring the Vipers ten to two. Within the first five minutes of the period, Hartman, Berzanskis, and Holmes all had goals; Hartman's came on a power play.

After a power play goal by Logan Chavez of Vancouver, Hartman sealed his hat trick on a shorthanded score at 7:57 on an assist from Evan Carter. Fourteen seconds later, Matt Walton connected on assists from Hartman and Carter. Hartman's fourth goal of the night came at 10:58 with an assist to Berzanskis to give the Generals a 7-3 advantage.

Berzanskis completed the hat trick with his second and third goals coming just twenty-three seconds apart from each other at 17:12 and 17:35. Hartman and Walton each had assists on both plays.

The second period concluded with three more scores within the last two minutes. Stoner's first goal of the season came at 18:25 on an assist from Ben Sera, followed by a strike from Erik Rosencrans at 18:58 on a pass from Connor Hoernlein. Kaleb Byers ended the bombardment of second period goals with the last goal of the frame coming at 19:19.

Unlike its predecessor, the third period featured far less scoring as the Generals outscored the Vipers two to zero. Hoernlein scored his first of the night at 2:56, helped out by Carter and Daniel Gomez. Gomez had the thirteenth and final goal of the night, converting on a power play at 12:58 with assists to Carter and Sera.

The thirteen goals by the Generals were the most in almost three years. The Generals had fifteen back on February 19, 2011.

Tuesday's win was the fifth consecutive for the Generals, the longest streak of the season. The Generals will put their five-game winning streak on the line this weekend as the first-place Bellingham Blazers come to Eugene to play two games on Friday and Saturday night. The Blazers have an even longer winning streak, which currently stands at nine. Tickets are available at the Generals ticket office or online at eugenegenerals.com.