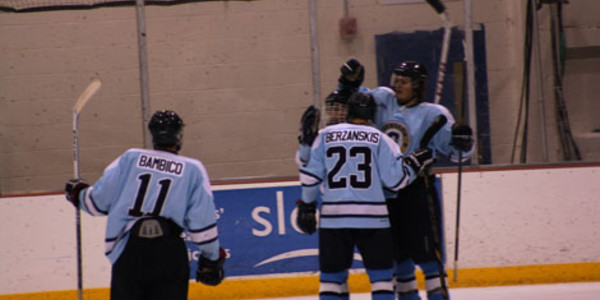 Both teams currently boast the longest winning streaks in the league; the Generals have won five straight while the Blazers have won their past nine games.

Friday and Saturday will be the first time the Blazers travel to Eugene this season for a regular season game. The teams played two exhibition games at the Rink Exchange back in September, which resulted in a Blazers’ 5-4 win and a 5-5 tie. Bellingham has not played a regular season game in Eugene in over a year, the last one being January 5, 2013.

The Generals are coming off a wild 13-4 win over the Vancouver Vipers on Tuesday night. Hunter Hartman had four goals and four assists, one point shy of tying the Generals’ all-time record for most points (nine) by a player in a game. Dans Berzanskis recorded a hat trick as well, Evan Carter totaled five assists, and eight others had at least one point during the game. Also, the Generals scored an astounding ten goals during the second period with Hartman and Berzanskis each scoring three times.

While the Generals were off last weekend, the Blazers played their first games of 2014 last Friday and Saturday against the Vipers. Bellingham won both by scores of 8-2 and 11-0 with fifteen different players recording a point during the shutout of Vancouver.

When the two teams collide this weekend, it will mark only the fourth and fifth meetings between the Generals and Blazers. Bellingham has won the first three contests, with the last one dating back to November 2nd. Both teams went back and forth, but in the end the Blazers won a close game 5-4.

Something to watch for this weekend will be the goaltenders for each team. Generals Goalie Cody Foster, who gets to see his former team he helped win a championship a season ago, has been on a torrid stretch in his last four games; he has posted a save percentage of 96.7% (60 saves on 62 shots) and has even recorded two shutouts during the four-game span. The Blazers have split a lot of time between Robert MacDonald and Joshua Stone, who have played twelve and eleven games, respectively. Each has a save percentage over 90% as well as nine wins apiece on the season.

Another interesting storyline is the leading scorers for each team, Hartman for Eugene and Cody Rich on Bellingham. In the last five games, each player has recorded fifteen points, a big reason why both teams have been on winning streaks. Hartman and Rich are also top five in the NPHL in points, with the Generals Captain having fifty-one points and the Blazers Forward with sixty-three. Hartman ranks fifth in the league in points while Rich is second but has scored the most goals out of anyone.

Saturday’s game will be the second Scout Night with the Generals; Boys and Girls Scouts in attendance and uniform will receive $3 admission to the game.

For those who cannot come Friday or Saturday night, fans can watch both games on the Eugene Generals Hockey Network (EGHN) on the team’s website with Alex Stimson serving as host. Coverage begins at 7:20, fifteen minutes before the game starts.