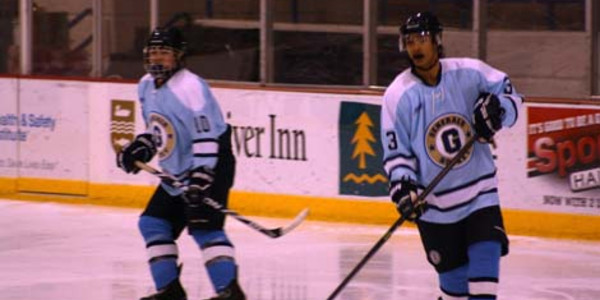 EUGENE, Ore. - The Eugene Generals (11-14-1) had their five game winning streak snapped when the Bellingham Blazers (24-5-0) defeated them 4-1 at the Rink Exchange.

Cody Rich of the Blazers, who came into tonight’s game second in the league in points, recorded a hat trick in the team’s tenth consecutive victory. After scoring his three goals, Rich is now the league leader in points and goals scored.

Not a lot of action occurred in the first period, until the 19:43 mark where the Blazers scored first. Rich notched his first of three on passes from Mark MacDonald and Nick Scherbinin to give Bellingham a 1-0 going into the first intermission.

In the second period, Rich connected for the second time at 4:21 to put the Blazers up two scores. Jack Speer and Ty Hubbard were there on the assists.

Despite having four Generals players on the ice, the Generals scored at the 12:32 mark of the period. Dans Berzanskis, coming off a hat trick from the previous game, had the shorthanded goal on an assist from Kyle Ruchas.

The third period was a battle as the Generals had some opportunities to tie the game at two apiece. Late in the period, however, the Blazers ended the Generals’ chances of winning with two goals at 16:33 and 19:00. Rich’s hat trick put his team up three while Sasha Perron had the last goal when he took advantage of the empty netter.

Generals Goalie Cody Foster played well against his former team, stopping thirty-five out of thirty-eight shots by the Blazers. Blazers Goaltender Robert MacDonald stopped the Generals’ opportunities with timely saves to prevent them from potentially tying the game.

The Generals play the Blazers again tomorrow night at 7:35 at the Rink Exchange. Tomorrow is also Scout Night with the Generals, with boys and girls scouts receiving $3 admission to the game.