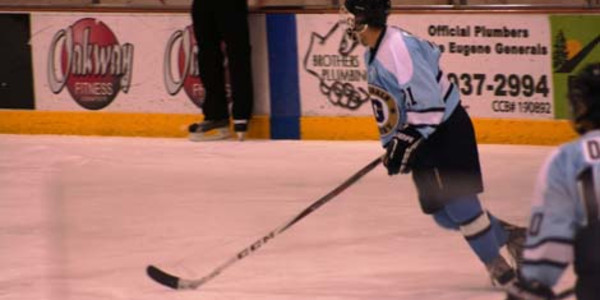 Unlike the previous game where the Blazers had three goals from one player, three different players scored the goals for Bellingham on Saturday. Two of Bellingham's scores were shorthanded goals.

Other than a few penalties, the first period was not filled with many highlights as neither team scored in the first twenty minutes. The Blazers outshot the Generals sixteen to six during the frame.

During the second period, the Blazers scored twice to give themselves a 2-0 lead going into the second intermission. They also outshot the Generals twelve to five in the second.

Nick Scherbinin had the first goal for Bellingham, connecting on his eighth goal of the season at the 4:52 mark to give his team the lead. Dawson Quint and Boris Knyazev had the assists on the play.

Mickey Turner scored next for the Blazers at 17:51 on a shorthanded goal to put his team up by two. Kevin Duncan and Kristjan Toivola were there on the assists.

In the third period, the Blazers pulled away with their third score of the game, coming on a shorthanded goal by Scott Hansen at the 6:26 mark. Mason Wade and Mark MacDonald assisted on Hansen's goal.

After Saturday night's game, the Generals will travel next weekend to play two games against the Vancouver Vipers and one at the Tri Cities Outlaws' home ice.

The Generals return to Eugene to play a home game February 4th at 7:35 against the Vipers. The game will be the team's second 2 for 1 Tuesday, where fans can purchase two tickets for the price of one regular ticket.