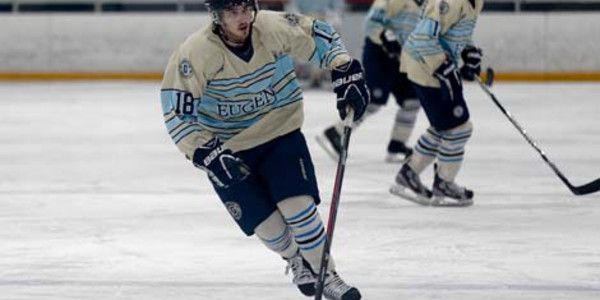 Coming into Friday night’s contest, the Generals had won their previous three games, all on the road. The Generals are in the midst of a seven-game road stretch, their last away games of the regular season.

Despite losing by five goals, the Generals actually outshot the Warriors 34 to 29. Warriors Goalie Aaron Zavesky recorded his third shutout of the season, stopping all 34 shots by the Generals. The Generals were shutout for the third time this year, the first against West Sound.

Ivan Bonarenko of West Sound provided the scoring for the Warriors, putting the puck in the net twice to give his team a 2-0 advantage. His first goal came on a power play at 6:54, with assists to Peter Mingus and Max McInnis. Less than a minute later at 7:51, Bondarenko connected again on assists from Mingus and Adam Moon.

Mingus scored the remaining goals for the Warriors the rest of the game, two of which came during the second period. Mingus connected at the 1:23 and 6:18 marks of the period, the first coming on assists from Gavin Nickerson and Joe Glithero; his second score was unassisted.

With Generals Goalie Daniel Spencer replacing Cody Foster midway through the second period, the Generals gave up one goal the rest of the game. The last goal occurred 5:07 into the third period, with Mingus securing his hat trick on the team’s second power play score of the night. Bondarenko and McInnis each had assists on the successful power play.

The Generals will have to quickly put this loss behind them as they play the same West Sound team tomorrow night in Bremerton. Saturday’s match will be the last regular season meeting between the two teams.

After tomorrow night, the Generals will finish off their regular season road schedule for two games in Bellingham. The Generals return home Tuesday, February 4th at 7:35 against the Vancouver Vipers. The game will also be 2 for 1 Tuesday, with fans being able to purchase two tickets for the price of one.