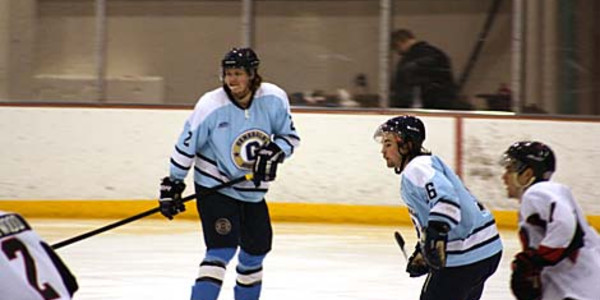 EUGENE, Ore. - The Eugene Generals (14-17-1) will travel this weekend to play two games against the Bellingham Blazers (29-5-0) for their final regular season away games.

After winning their first three games of the road trip, the Generals lost the previous two last weekend against the West Sound Warriors. The Generals were shutout 5-0 last Friday and lost a close 3-1 contest on Saturday.

Meanwhile, the Blazers have continued their torrid stretch as they are currently on a fifteen game winning streak. The Blazers are coming off a pair of wins last weekend against the Vancouver Vipers, winning 6-1 and 11-1. The last loss for Bellingham was November 27th when they lost 7-4 to West Sound.

Both teams last met three weeks ago at the Rink Exchange. Bellingham was outstanding on defense, allowing only one goal in the two games. Generals Goalie Cody Foster kept his team in both games by saving 67 of 73 Blazers’ shots for a save percentage of 91.8%.

Bellingham will also be playing in their final two home games of the regular season. Through their first eighteen home games, the Blazers have won fifteen of them with their last home loss coming October 25th. The Blazers will have home-ice advantage in the first round of the NPHL Playoffs next month.

This weekend’s games will also feature three of the top five point scorers in the league. Eugene’s Hunter Hartman ranks fifth in the entire in points with 59, 26 of which coming on goals and 33 on assists. The Blazers boast the top scorer in the NPHL with Cody Rich, who has accumulated a league-leading 81 points and 39 goals. Mason Wade of Bellingham ranks fourth in the league with just two more points than Hartman with 61 total.

Getting the puck past the Blazers’ goaltenders will be a tough task for the Generals. In six of their past seven games, the Blazers have not allowed multiple goals to their opponents. Joshua Stone has the most wins of any goalie in the league with 13 and owns a 91.6% save percentage.

After the Generals close out their road schedule in Bellingham, the team returns to Eugene to play their final six games at home. The next home game will be Tuesday, February 4th at 7:35 when the team hosts the Vipers. Fans can purchase two tickets for the price of one in the Generals’ 2 for 1 Tuesday at the Rink Exchange.