Generals get behind early, lose 7-2 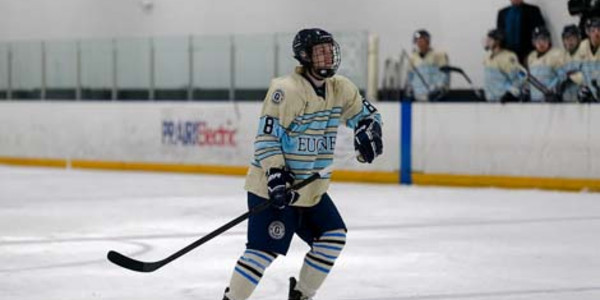 Bellingham started the game off with two first period goals, both scored by Dawson Quint. Just twenty-eight seconds into the game, Quint scored his first of three goals on the night on assists form Boris Knyazev and Jack Speer. Late in the period at 18:41, Quint connected on a power play with assists to Knyazev and Kevin Duncan.

In the second period, the Blazers did not score until the 10:56 for their second successful power play of the game. Duncan had his first goal of the night on assists to Quint and Kristjan Toivola. Mason Wade scored soon after at 12:14, with help from Cody Rich and Nick Scherbinin. Rich closed out the period by connecting on his league-leading thirty-ninth goal of the season at 17:40.

The Generals responded early in the third period for their first goal in their last four period of play. Twenty-one seconds in, Justin Stoner recorded his second goal of the season when he was assisted by Jared McDaniel.

At 7:59, the Generals cut into the Blazers’ lead on a goal from Connor Hoernlein. Evan Carter and Quentin Holmes each had assists on the play.

In the last three minutes of play, the Blazers would score two more times at 17:25 and 19:40. Gerin Hohl had the Blazers’ first goal of the third period, with assists to Speer and Duncan. Quint completed his hat trick with twenty seconds left on a power play goal set up by Knyazev and Luke Wagner.

The Generals will try to cool off the red-hot Blazers again tomorrow night in the team’s last road game of the regular season. Bellingham has now won sixteen games in a row.

After tomorrow night’s game, the Generals will finish off their final six games in Eugene. The next home game will be Tuesday at 7:35 when they host they Vancouver Vipers for the last time this season. Tuesday’s game will also be 2 for 1 Tuesday with the Generals, with fans being able to purchase two tickets for the price of one.