Generals in must-win situation after 9-1 defeat 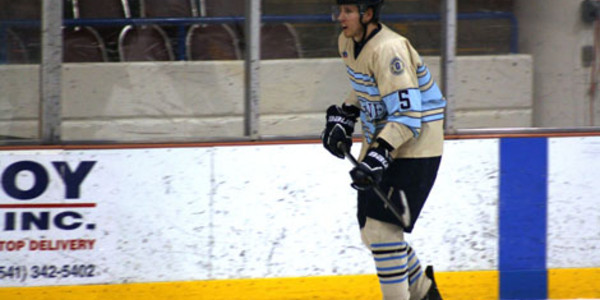 BREMERTON, Wash. - The Eugene Generals (0-2) were blown out 9-1 by the West Sound Warriors (2-0) Wednesday night in Game Two of the NPHL Semifinals and are now down 0-2 in the first round best-of-five series.

After playing the Warriors tight in Game One the night before, the Generals could not keep up with West Sound tonight and will now come back to Eugene with the pressure on them. The Generals need to win Friday and Saturday night at the Rink Exchange if they are to force a game five Sunday on the Warriors' home ice in Bremerton.

The Generals were within reach of the Warriors in the first twenty minutes of play, getting some quality shots off and only being down 1-0. Henry Huerta and Max McInnis assisted Dom Kolbeins late in the first period at 18:20 for the only goal of the frame.

Midway through the second period, the Warriors took control of the game with three scores in less than two and a half minutes. Jimmy Morgan scored the second goal of the game at 9:31, followed by a power play goal from Andy Williams exactly one minute later. At 11:52, Gavin Nickerson skated past the Generals' defenders for an unassisted goal to make it a 4-0 game.

Williams had his second goal of the night, this time shorthanded and coming five minutes after his first one 15:33 into the second period. Joe Glithero's assist on the play marked his fifth of the postseason.

Following an unsportsmanlike penalty from West Sound after their fifth goal, the Generals quickly capitalized on the power play advantage for their first score of the contest. Hunter Hartman and Dans Berzanskis assisted Connor Hoernlein on his first goal of the series, occurring just sixteen seconds into the power play at 15:49.

The Warriors added to their lead in the third period with the next two goals coming within ten seconds of each other. McInnis connected on the power play at 4:49 while Steven Zavesky added a goal of his own ten seconds later at the 4:59 mark.

West Sound finished the second game of the series with two more scores for a final of 9-1. McInnis scored his second goal of the contest at 7:47 from Huerta and Kolbeins for the team's eighth of the game. Williams closed out the night by completing the hat trick at 19:31 on his second shorthanded goal, who took advantage of a Generals' turnover in their zone close to the net.

The Generals had twenty-five shots on goal, compared to fifty for the Warriors. Cody Foster stopped twenty-five West Sound shots on net while Daniel Spencer, who entered the game near the end of the second period, had sixteen saves.

The Generals will try to keep their season and playoff hopes alive this Friday night at 7:35 at the Rink Exchange when the team tries to stave off elimination in Game Three of the NPHL Semifinals. EGHN will broadcast the game with coverage beginning fifteen minutes before the first faceoff. If necessary, the Generals will host the Warriors for Game Four at the same time Saturday night at the Rink Exchange. Tickets are on sale at the Generals' ticket office or online at eugenegenerals.com.