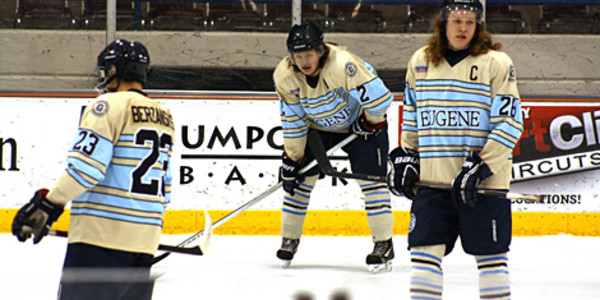 EUGENE, Ore. - The Eugene Generals announced the recipients of the 2013-14 Player Awards at the team's banquet, held this year at the Sweetwater Restaurant at Valley River Inn.

Each year, the Generals are proud to bestow seven players, along with a volunteer and host family, an award and recognition for their contribution to the team this season.

Captain Hunter Hartman received three of the player awards Monday night; he was voted the team’s Most Valuable Player, Best Offensive Player, and Player’s Choice Award. After winning the Generals’ Rookie of the Year Award last year, Hartman took up the leadership role, being selected as the team’s captain this season. Hartman improved on his impressive rookie campaign, leading the Generals this year in goals, assists, and points (28 goals and 43 assists for 71 points total). He also recorded multiple points in 20 games and fell one point shy of the franchise record for most in a game (9 is the mark) when he tallied four goals and four assists back on January 7th.

Previously playing for the Generals during the 2010-11 season, Evan Carter displayed serious ferocity and tenacity whenever he stepped on the ice. Because of his steadfastness and determination, Carter was awarded the Bobby Freeland Golden Hard Hat Award; the honor is given to a player who always shows up and refuses to quit. Despite missing four games due to injury, Carter recorded 37 points, was third on the team in assists (29), and had the most shorthanded assists with three.

Being one of the five returning veterans from last season’s roster, Kyle Ruchas was heavily relied on as the only returning defenseman at the very beginning of the year. Ruchas received the award for Best Defensive Player, playing in 39 of the team’s 40 games this season. The defenseman from Colorado also improved on his numbers, increasing his points total to 18 and recorded 13 assists as well, ten more than last year.

Joining the team right before the season started, Erik Rosencrans displayed a lot of growth throughout the season to earn the team’s Most Improved Player Award. Rosencrans was one of three Generals players to play in all 40 regular season games; eight of his ten points came in the last half of the season, helping the Generals to a third place finish in the standings.

Latvia native Dans Berzanskis was awarded the Generals’ Rookie of the Year. His first full season in juniors, Berzanskis was second on the team in goals and points total (25 goals, 53 points) and recorded two hat tricks as well. He also had a streak in the middle of the season of recording a point in twelve consecutive games and in seventeen of an eighteen game-stretch.

Marleena Pearson was the recipient of the Norma J. Evans Volunteer of the Year Award. Pearson runs the Pointstreak account during games, keeping viewers updated throughout the game by recording stats for both teams. This is her second year running Pointstreak for the Generals, a job which requires a lot of attention to detail.

The Hartley Family was given the award for Host Family of the Year. The award is given to the host family, or "billet," who best exemplifies support of the players, team, and organization. John, Elaine, and Colton Hartley have been a host family for players for several years and housed four Generals' players this season.

The Generals want to thank everyone for making the team's ninth season a successful one. Preparations will begin soon for the Generals' tenth year of hockey in Eugene.