Hartman and Bambico to play at Franklin Pierce 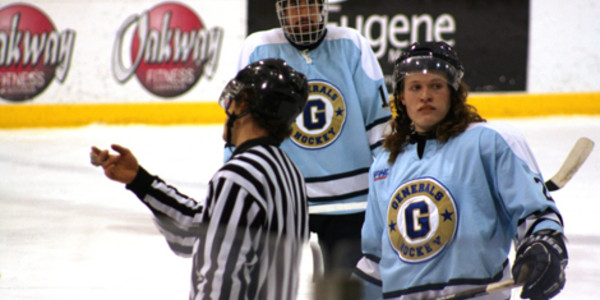 EUGENE, Ore. - Hunter Hartman and Connor Bambico, both vital leaders for the Generals over the years, will be attending and playing hockey at Franklin Pierce University in New Hampshire.

Both twenty years old, Hartman and Bambico are not the first Generals players to attend Franklin Pierce University. Other Generals alumni who played for the Franklin Pierce Ravens include Sean Woodring, Justin Adams, and Nate Schursky.

Hartman and Bambico have played an integral role for the Generals in helping them achieve success throughout the season and reaching the playoffs. Bambico was an assistant captain the last two seasons while Hartman was the captain for the team this past year.

Bambico leaves the Generals having played the most games in franchise history with 165. The defenseman from Tacoma joined the Generals before the 2009-2010 season and played the next five seasons with the team. In his five years with the team, he accumulated 124 points (42 goals, 82 assists), by far the most of any defenseman in Generals’ history.

During the 2012-2013 season, Bambico helped lead the Generals to their best record in the previous three seasons, finishing in second place in the standings. He also set the franchise record for most points in a regular season by a defenseman with 54 (17 goals, 37 assists), breaking Blake Bishop’s mark of 53 in 2009-2010. His hard work and dedication led to his being named MVP of the team during that season.

In his first season with the team in 2012-2013, Hartman made an immediate splash by garnering 65 points, second most on the team. He also set the franchise record for most power play assists in a season with 26 and recorded four game-winning goals as well.

One year later, Hartman was one of six returning Generals players and named captain of the team. Leading by example, the Denver native helped the Generals reach the playoffs for the ninth season in a row and led the team with 28 goals, 43 assists, and 71 points. He also recorded an astounding plus/minus of 33 and was bestowed the team MVP award.

The Generals will be looking to fill the holes left behind by Hartman and Bambico when the team’s Main Camp rolls around. The Eugene Generals Main Camp will take place August 15-17 at the Rink Exchange.