Generals Chatter is back 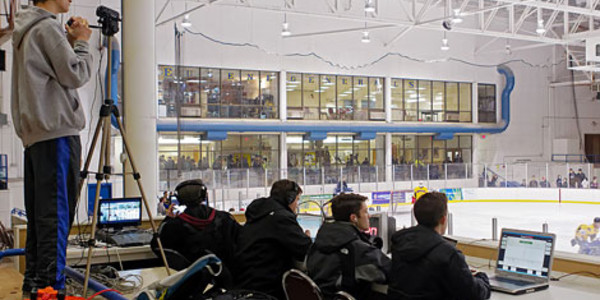 This season, expect many changes to the weekly installments, as Executive Producer of EGHN Alex Stimson has revamped the once static show.

Instead of being broadcast as a weekly online radio show, Generals Chatter will now be in a video format. The weekly installments will be uploaded once a week to the Generals’ Vimeo channel.

“Our broadcast has been the best online broadcast in the league the past few years,” said Stimson, “and it keeps evolving to meet the demands of our loyal fans. It was this that gave rise to the evolution to Generals Chatter, and we are all excited to take advantage of this media.”

The video formatted Generals Chatter will run for approximately 20-30 minutes, and will be uploaded each Wednesday evening.

The ability to take advantage of video will now allow Generals fans to more easily put a face to their favorite players. “With the new format of Generals Chatter, we can conduct more in-depth interviews with players, which will allow fans to get to know the players,” remarked Stimson.

“We are encouraging fans to submit recommendations for the content they would like to see on Generals Chatter,” says Stimson. “We want fans to submit questions they have about players, the game of hockey, what goes on behind the scene during games, and any question they have ever wondered about the Generals.”

Fans are encouraged to join the conversation on social media, which will allow them to submit questions to, and be recognized on, Generals Chatter.

Although the goal is to have Generals Chatter be a weekly installment, Stimson recognizes some of the challenges that will be presented during the season

“When the team goes on the road this December, it will be difficult to collect quality game footage,” commented Stimson. One reason for this is other teams around the league have only recently begun to utilize a video broadcast of hockey games.

Nonetheless, Generals fans should tune into Generals Chatter once a week for the most in-depth Generals news.

As the Generals General Manager Flint Doungchak stated, “if fans want inside news about the Eugene Generals and the Northern Pacific Hockey League, then Generals Chatter is the place to go.”