Weekend Preview: Two on the road 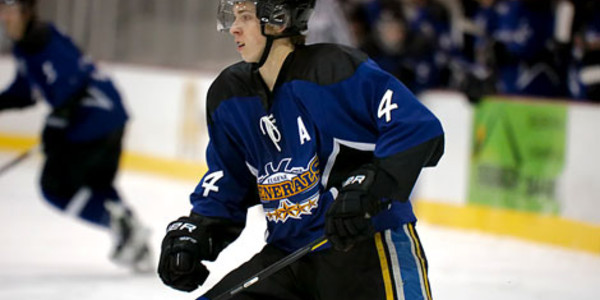 EUGENE, Ore. - The Eugene Generals (7-3-1) will play two games away from home this weekend against the Bellingham Blazers (4-8-1) on Friday and Saturday.

Each team had a wide margin of victory in their most recent game; the Generals out scoring the Vancouver Vipers 11-2, and the Blazers winning 5-1. Adding to the impressive margins of victory, both teams are riding a three-game winning streak, and both teams will fight to keep their streak alive.

With a 2-2 away record, the Generals have been a team that has struggled on the road this season. Meanwhile, the Blazers have had bad luck at home, with a home record of 0-2. This weekend provides each team with a great opportunity to step up to the plate, and improve their record.

In the two prior meetings this year, the Generals have collected two wins, and outscored the Blazers 10-6.

The Generals have four players averaging more than one point per game against the Blazers. While Stephen Soloway has averaged 1.5 points; Hunter Hartman, Matthew Walton, and Connor Bambico have each averaged two points in the Generals two games against Bellingham this season.

Bellingham is home to one player, Mason Wade, who leads the blazers in point scoring, and has average one point per game, when playing Eugene.

However, within the Blazers last five games, Bellingham forward Cody Rich has exploded onto the scene.

Rich has averaged three points per game, over Bellingham’s last five games, which he played in just four. Within this scoring parameter, Rich has 15 points (eight goals, seven assists).

The Generals defense will have to keep the puck out of the defensive zone and away from Rich if they wish to slow down the Blazers’ hottest scoring threat.

After this weekend’s series, the Generals will travel home to play the West Sound Warriors for the first time of the season Nov. 23, and 24. Saturday, Nov. 24 will be a Teddy Bear Toss toy drive for the pediatric unit at Sacred Heart RiverBend. All fans who bring a new teddy bear will receive free admission to the game.