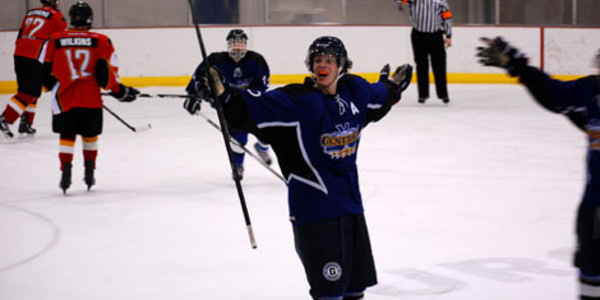 The second place Generals gave the first place Warriors their first loss since Sept. 29. In addition, the Generals gained two points on West Sound in the standings.

In the first period, West Sound forward Josh Twietmeyer scored the only goal of the period, putting his team up 1-0.

Generals leading scorer, Zak Johnson, scored his first of three goals on the power play 9:36 into the third period.

West Sound’s Mitchell Pijanowski tied the game 2-2 after putting the puck past the Generals goalie 11:39 seconds into the period.

The Generals then scored four unanswered power play goals; showing the Warriors why Eugene has the most lethal power play in the league.

Johnson led the charge by scoring his second power play goal of the night16:13 into the period. Hartman was awarded the assist on Johnson’s goal.

Generals veteran forward Justin Huelsman lit the lamp on the power play 17:13, after deflecting a slap shot taken by Johnson.

Johnson recorded a hat-trick by going low on the glove side of the Warriors goalie, and putting the puck in the back of the net late in the third period.

Generals forward Connor Hoernlein walked the puck out of the corner, shot the puck, and lit the lamp for the final time in tonight’s game.

The Generals will host the Warriors once more tomorrow night. The game will be a Teddy Bear Toss. All fans are encouraged to bring a new stuffed animal to donate the pediatric unit at Sacred Heart. Fans that bring a stuffed animal to toss on the ice after the Generals first goal of the night will receive free admission.