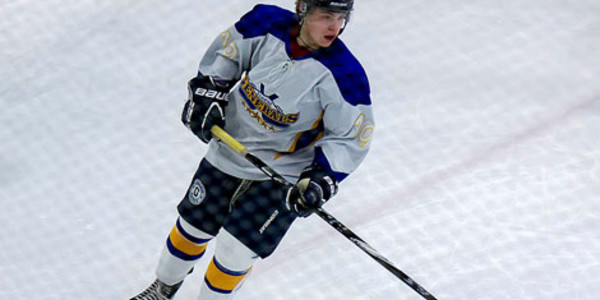 EUGENE, Ore. - The Eugene Generals (10-6-1) are back to their winning ways after earning their first victory of the season against the Tri-Cities Outlaws (10-9-1) in a 6-3 defeat.

After tonight’s win, the Generals earned two points in the standings, which has created a three-way tie for second place with Tri-Cities and Glacier.

In the first period, both teams played neck-and-neck, as the score sheet remained blank for the first 20 minutes of the game tonight. However, the Generals gave the Outlaws two chances to score by committing two penalties.

Eugene exploded onto the scoreboard in the second period.

The Generals scored three consecutive goals in a matter of 71 seconds midway through the second period.

Zak Johnson started the goal scoring by notching one of his own 10:01 into the period.

Seconds later, Stephen Soloway made it a two-goal game by shooting the puck past the Outlaws netminder 10:30 into the period.

On Eugene’s only power play of the night, Connor Bambico scored off of a pass from Johnson at 11:12.

After suffering a three-goal deficit, the Outlaws found the stat sheet when Devan Beck put his team on the scoreboard 11:40 into the period.

The newest offensive member of the Generals roster, Michael Alforque, put Eugene up 4-1 at 18:21. Although there were 22 minutes left to play, Alforque’s goal gave the Generals a comfortable lead entering the third period.

The Generals took to the ice in the third period determined to put the game away.

Eugene took a 5-1 lead 22 seconds into the third period when Matthew Walton put the puck past the Outlaws goalie and into the back of the net.

Johnson recorded his fourth point of the night after scoring on an empty net 19:35 into the third period. Johnson’s goal was the Generals final goal of the night.

The Outlaws will host the Generals for the two teams third consecutive game. The winner of tomorrow night’s game will remain in second place, while the loser will fall into third.