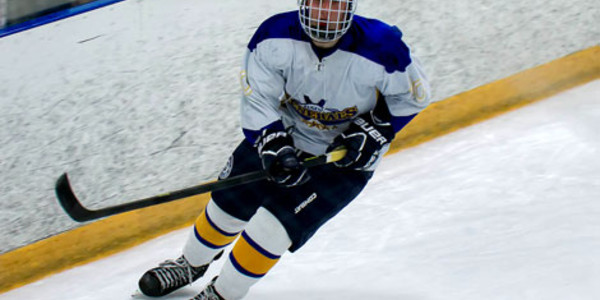 After scoring last night’s game-winner, defenseman Connor Bambico found the back of the net 0:34 into the first period. Bambico’s goal was a power play goal, and was assisted by Matthew Walton.

West Sound responded by scoring a power play goal of their own. At 5:07 of the first period Josh Twietmeyer tied the game 1-1.

In the second period, West Sound took the lead at 5:28, when Jake McMullen scored the Warriors second consecutive power play goal. The Generals would hold the Warriors scoreless for the rest of the game.

The Generals leading scorer, Zak Johnson, scored an unassisted goal 9:55 into the second period to tie the game. Johnson has scored 23 goals this season.

The Generals were determined to put the game away in the third period.

Stephen Soloway recorded the game-winning goal on the power play that was caused by Wells’ cross checking penalty. After being passed the puck by Bambico and Johnson, Soloway buried the puck into the net, putting the Generals up 3-2.

The Generals now ride a four game-winning streak heading into Monday’s game at home against the Vancouver Vipers. After Monday’s game there will be a public skate with the players that will end at 12:30 a.m. Skate rentals are $2.