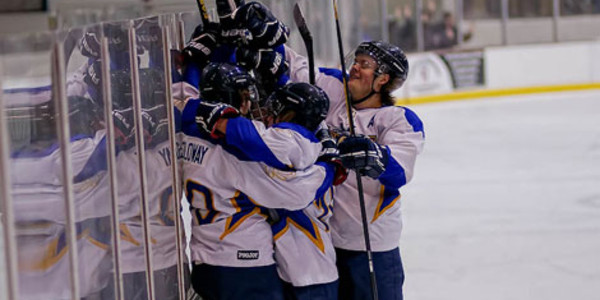 The Generals found themselves battling from behind several times tonight, but by the time the final whistle was blown Eugene was the dominant team.

Tri-Cities scored the first two goal of the game, putting the Generals in a two goal deficit. Cody Anderson and Devan Beck were the Outlaws’ goal scorers.

Generals’ forward Kenneth Grabeldinger scored the first goal of the night for Eugene off of a shot that was mishandled by the Outlaws goaltender at 17:01 of the first period.

The Generals fought hard and took the lead in the second period.

After deeking through traffic, Matthew Walton tied the game for the Generals on a shot that was placed on the far side of the Tri-Cities goalie.

The Outlaws took the lead for the second time tonight when Brett Myer scored an unassisted goal at 9:54 of the second period.

In the back-half of the second period, Hunter Hartman scored two goals to tie the game, and then give the Generals a 4-3 lead going into the third period.

The Generals wasted little time to find the back of the net in the third period. Krisjanis Reinfelds took a shot from the blue line that deflected off of the goalie’s leg pad and into the net at 0:57 of the third period.

The Outlaws scored three consecutive goals to give Tri-Cities a 6-5 lead midway through the third period. Aaron Questad, Alexander Higley, and Mikey Doubrava were the Outlaws’ goal scorers.

Grabeldinger scored his second goal of the night on a power play at 14:35 to tie the game 6-6, and gave the Generals a chance to win the game in overtime.

Generals’ veteran forward Justin Huelsman scored the game winner on a shot taken from the high slot 2:16 into overtime.

The Generals host the Outlaws tomorrow night at 7:35 p.m.