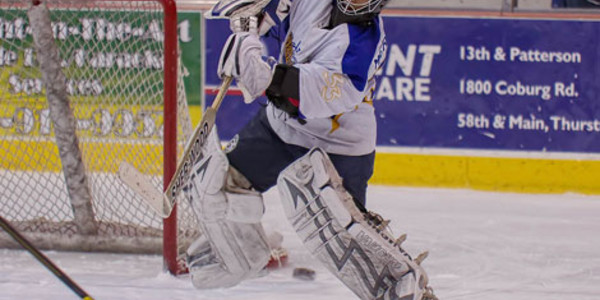 The Generals top scores have found a way to put the puck in the back of the net, and the team is back to winning.

The Generals dominated the first period; putting three points on the scoreboard in the first twenty minutes of play. In the first period, Eugene received goals from Stephen Soloway, Krisjanis Reinfelds and Zak Johnson.

It took the Outlaws more than 28 minutes to put a point on the scoreboard. Tri-Cities’ leading scorer Brett Myer scored the Outlaws first goal of the night at 8:03 of the second period.

Hunter Hartman recorded his fourth point of the night when he lit the lamp at 9:12 of the third period. The goal was scored from a shot that was deflected by the Outlaws’ goalie and dumped back in by Hartman.

The Outlaws scored back-to-back goals in the second-half of the third period. Mikey Doubrava and Devan Beck were the goal scorers for Tri-Cities.

The Generals scored three insurance goals in the last five minutes of the game to guarantee a Eugene win. The Generals received goals from Johnson, Sullens and Connor Bambico.

The Generals have won each of their games they have played this weekend. The team will play the Vancouver Vipers on the road tomorrow evening.