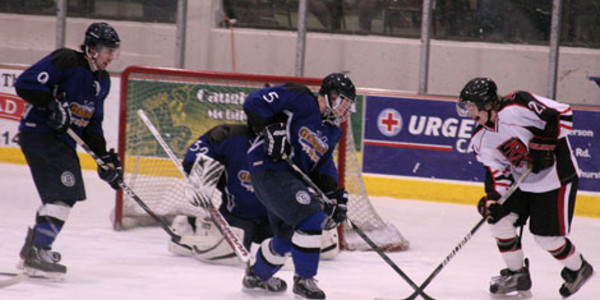 Special teams were the difference maker in tonight’s matchup. Eight of the 12 goals that were scored in regulation came from each team’s power play or penalty kill. The Generals scored one shorthanded and three power play goals. Bellingham, on the other hand, scored four power play goals.

Christian Merritt scored two power play goals tonight. In the two games he has played for the Generals this season, Merritt has scored five times.

The Blazers started off the scoring tonight when Bryce Kenning scored an unassisted goal 0:58 into the first period.

The Generals held the Blazers scoreless for the remainder of the period, and notched three goals of their own. Matthew Walton was the first player from Eugene to light the lamp at 2:40. Zak Johnson scored his first goal of the night at 2:53, and scored his second on the power play at 19:22 of the first period.

It took both teams nearly half a period to find the back of the net, but by the end of the second period the score would be tied 4-4.

Bellingham’s Cody Rich made it a one-goal game 8:53 into the second period by scoring on the power play.

While on the penalty kill, Merritt took advantage of a Bellingham turnover that was intercepted by Joshua Arnold. Merritt scored the Generals fourth goal of the game, short handed, at 9:14 of the second period, and Arnold was given the shorthanded assist.

The Blazers went on to score two goals before the period expired. Bellingham received a goal from Mason Wade at 10:57, and Rich recorded his second power play goal at 14:57 of the second period.

Scoring two goals each, both the Generals and Blazers battled in the third period to take the lead. Every goal in the final period was scored on the power play.

Wade gave the Blazers a 5-4 lead by scoring his second goal, and first power play goal, 5:22 into the period.

Hunter Hartman tied the game for the Generals 5-5 by scoring on the power play at 10:47.

Wade, with the hot hands, recorded a hat trick by scoring his third goal of the night, and second power play goal, at 16:19.

Merritt, sensing the Generals had little time to tie the game, lit the lamp on the power play at 19:10 of the third period. Merritt’s goal was the final goal of regulation and forced the game into overtime.

Neither team scored in extra time, and the game was forced to go to the shootout.

In the shootout, both teams exhausted five shooters before Arnold scored the game winning goal by shooting the puck blocker side on the Bellingham goaltender.

The Generals will be at home next Friday and Saturday, when they take on the West Sound Warriors. Saturday Night’s game will be the final Scout Night With The Generals this season. All Scouts that attend the game in uniform will receive 50 percent off admission. Scouts will get the chance to get their favorite players autograph and skate with the team after the game.