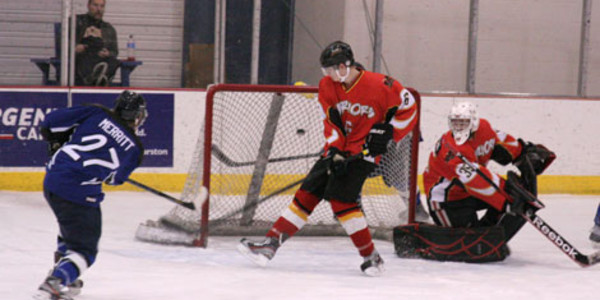 Entering tonight’s game, the Generals and Warriors season series was tied 3-3, but the Generals out played the Warriors tonight, and took a 4-3 lead in the series.

From the drop of the puck, until the last whistle was blown, the Generals came to play.

West Sound started off the scoring in the first period tonight, when Max McInnis lit the lamp at 2:41 of the period.

The Warriors tied the game 3-3 at 17:05 when Mike Byers scored the only goal of the second period.

The third period was a seesaw battle to see which team had the determination to win the game.

Zak Johnson gave the Generals a 4-3 lead when he poked the puck into the net after a scrum at 1:57.

West Sound scored back-to-back goals at 6:52 and 7:43 of the third period. Kai Wilkins and Byers were the goal scorers.

Christian Merritt scored the final two goals of the game, including the game-winner, at 15:31 and 16:46 of the third period.

The Generals will host the Warriors again tomorrow night at 7:35 p.m. for the final Scout Night With The Generals.