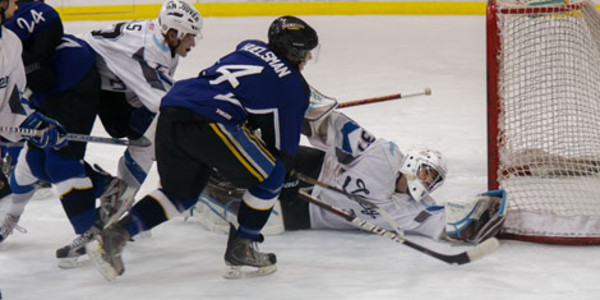 EUGENE, Ore. - The Eugene Generals were eliminated from the playoffs by the Vancouver Victory in a 5-2 loss.

Now that the Generals have been eliminated, the players and coaches will return home, as their season is over.

After last night’s late win, the Generals had difficulty producing any offense in today’s game. The Victory held the Generals scoreless through the first two periods of play. The Generals, on the other hand, were unable to do the same.

Victory forward Jack Petrino scored a powerplay goal 10:54 into the first period. Petrino’s goal was the lone goal of the period.

The Victory put the Generals in a five goal deficit in the third period after they received goals form Marcus Daniels, J. Bordak and Elijah Bordak.

However, the Generals would not go down without a fight.

Kirby Carlson put the Generals on the scoreboard 15:29 into the third period.

Generals Team Captain Christian Merritt provided his team with their final goal of the night and the season 16:50 into the third period.

The Generals would like to thank every person that came and showed support in the best hockey in Eugene, which is that of the Generals.

From here, the Generals will take a break before they begin to prepare for next season. In the weeks and months to come, the Generals will reevaluate their roster and look for new players at hockey showcases to fill the holes of the players who will age-out after this season.

For more information:Jackson PhillipsDirector of Public Relations and Volunteer CoordinatorEugene GeneralsThis email address is being protected from spambots. You need JavaScript enabled to view it.(541) 359-4154 Ext. 207 (office)(510) 862-7174 (cell)