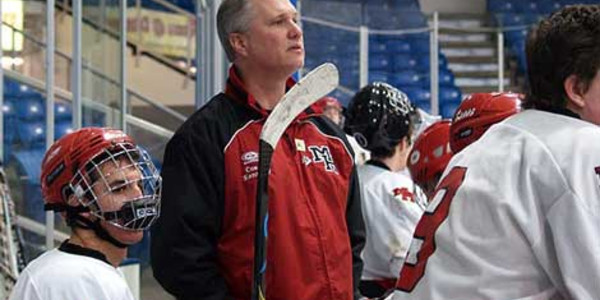 The Eugene Generals announced that Chuck Kennedy will replace Jay Miller as Head Coach. Chuck is the fourth Head Coach in franchise history. The Generals finished last season 38-10 and Chuck is preparing to keep the winning tradition alive. Kennedy will take the reigns from Interim Head Coach Flint Doungchak who normally serves as the franchises General Manager.

"The opportunity to join an organization such as the Generals was really quite an easy decision," Chuck said. "I'm amazed at the passion of this club towards the development of the boys in all aspects of their growth as young men, and not just in their hockey development." Kennedy actually joined the team ahead of Main Camp back on August 10, 2010 after the abrupt annoucement by four year veteran coach Jay Miller that he would be leaving the franchise. Kennedy has been serving the role as Head Coach since that time but an official announcement was made today.

The Generals have made the playoffs the previous five seasons. The Generals' roster is shaping up, and Coach Kennedy likes what he see coming out of camp. What kind of style can fans expect from this years Generals team? "Speed and hockey acumen is high among this group. I believe on the offensive side of things we will be pretty strong with some key returning veterans capable of putting it into the back of the net," coach said.

General Manager Flint Doungchak is excited with what Chuck brings to the organization. "We are excited to be able to bring Chuck under such short notice," Doungchak said. "Chuck fits the philosophy of the organization of not just developing hockey plays, but developing high character young men on and off the ice. Kennedy will be relocating from Michigan where he previously spent the last 17 years coaching at various High School and travel level hockey programs.

For more information about the Generals visit eugenegenerals.com